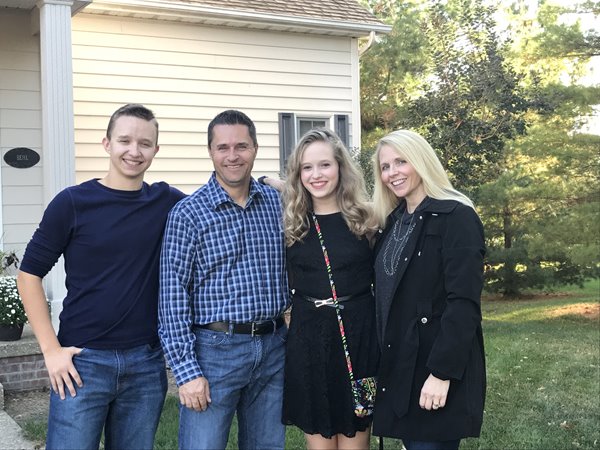 “I’m in agriculture and I love the seasonal cycles and watching things grow,” Behl says. He takes pride in being a source of solutions for both his farm clients and in his active personal life with his wife, Kimberly, son, Zachary, and daughter, Reagan.

Catching an early sign
So, in August 2020, when he found swelling in a lymph gland on the side of his throat, he put his analytical skills to work. He monitored the swelling on his own for a bit, but when it didn’t subside, he contacted his primary care physician. After evaluation, the doctor referred him to Chris Lansford, MD, an Ear, Nose and Throat specialist at Christie Clinic in Bloomington.

During the exam, Dr. Lansford saw evidence of malignancy on Behl’s left tonsil. A biopsy confirmed a diagnosis of squamous cell carcinoma, human papillomavirus HPV 16. HPV 16 is a common virus and is the cause of 60% of cancers of the nose and throat.

“My doctor said it would be a ‘speed bump’. It’s going to get tough, but Chris, we've seen this respond well to treatment,” Behl said.

He had chemotherapy at Illinois Cancer Care with Pankaj Kumar, MD. His radiation therapy was conducted by Kalika P. Sarma, MD, at Carle Cancer Institute Normal.

Throughout the process, he carefully recorded each event and milestone along the way, including his feelings, challenges and victories. It’s a habit that has given him both a detailed account of his experience and a sense of perspective on his journey overall.

A decision that helped
Because the treatment impacts the patient’s mouth and throat, providers encouraged Behl to have a food port put in place before starting treatment. Although it was a difficult decision, he said the port really became an asset in maintaining his nutritional status and weight more comfortably through treatment.

Behl went into his treatment as an active person and it was important to him to stay involved in his favorite activities. “Cycling and golf are my things,” he says. Being able to maintain his caloric intake without discomfort gave him the energy to maintain his active lifestyle.

Back to life
Behl is proud to recently complete treatment and will soon have his food port removed. He’s beginning to be able to sample his favorite foods for the first time since treatment.

For patients new to the journey, Behl says he was confident in his choice to stay local with his treatment. He was pleased with his doctors and with the skill of the treatment teams that supported him along the way.
But most of all, he says he can’t imagine doing any of it without the amazing support of his family. “I have these three angels under my roof and I don’t know how I’d do it without them.”