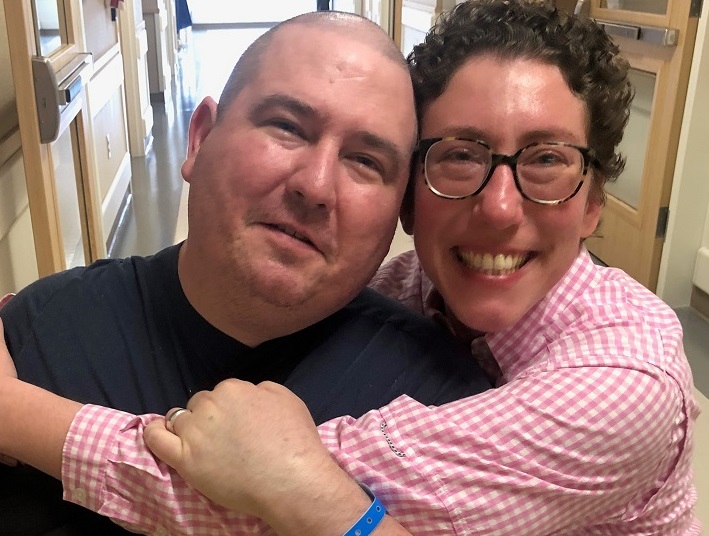 Brian Kelly’s first goal at Hosick Rehabilitation Center at Carle: Learn how to get from his bed to a wheelchair.

The 44-year-old from Champaign had been otherwise healthy until he had a seizure in October 2018. The seizure revealed Kelly had glioblastoma, a form of brain cancer. After a biopsy, Kelly learned it was a grade four tumor and could not be removed by surgery.

After 42 days of radiation and chemotherapy, Brian went through February and the beginning of March before having an MRI. The MRI revealed possible growth or swelling still in the tumor. On March 22, he went to the Emergency Department due to worsening headaches. He and his family spent the next week between Carle and Northwestern University. After an MRI at Northwestern, Kelly’s care team determined the tumor had changed and could be surgically removed.

The surgery was April 5, on April 9 he needed another surgery to address a blood clot.

“Memory and trying to find the right words were the hardest,” Kelly said.

He spent seven weeks at Hosick Rehab Center, first learning how to get into and push himself in a wheelchair and progressing to the basics of walking. Therapists also worked on his speech and memory. Kelly is an example of the more complex cases Hosick Rehab Center now handles.

“The team members have come together to expand their knowledge and problem solve,” said Renee Daniels, director of Carle’s Rehabilitation and Wound Services. “We have dealt with complex patients before. Now we are caring for them more frequently.

"The teamwork we have is hands down what has let us adapt to the change.”

Sept. 15-21 is National Rehabilitation Week, a time to recognize medical professionals – including physicians, nurses, physical therapists, occupational therapists and speech therapists, and more – who help patients gain mobility and return to the normal routines of life.

“Our inpatient rehab population is getting more complex and less medically stable,” said Amanda Burwell, Carle Rehab admissions coordinator. “Five or six years ago, we would see patients who needed minimal assistance. They could move. There was no question whether we could get them home.

“Now the patients are very impaired, needing lots of assistance and have little mobility.”

Burwell said the percentage of patients requiring more than one person to help them move has jumped from 25 percent in 2018 to nearly 60 percent so far in 2019. The average length of stay has increased, too.

Patients with less-complex conditions, sometimes those recovering from milder strokes, typically would have stayed on the unit for five to seven days. However, it’s becoming more common for these patients to go straight home with support from home health or outpatient therapy.

“With the advances in emergency medicine and interventions, more people are living after traumatic, severe medical events. That’s shifted what rehab has become,” Daniels said.

Kelly is home and returns to Carle for three outpatient therapy sessions a week. Because the tumor was on the left side of his body, he is still unable to use his right hand to write. However, computer speak-to-type software helped him return to work as the Champaign County chief deputy circuit clerk.

Kelly manages 40 people, and a lot of his job requires memory. To return to work, Kelly had to grow his memory, including his ability to tell time and count money.

“Each day I feel stronger and better,” Kelly said. “I don’t think I would feel that way if it wasn’t for the people caring for me right now, including my wife, outpatient rehab and those who started me off.”

When Kelly is in the therapy gym, he tries to encourage other patients who become frustrated that their once-healthy bodies don’t function as before.

“I tell them, ‘It’s going to take a while, but you will start seeing strides,’” he said.

Kelly knows some of his abilities will take more time to return, so he’s working hard in therapy and looking ahead to 2020. He’s also working with his oncologist to aggressively prevent the cancer from coming back.

“With the clay they’ve had to mold with, Hosick Rehab Center did an amazing job,” self-deprecating Kelly said.

Helping the best get better