After the loss of a loved one, those grieving want just one more chance to hug or talk to the person they miss so dearly. Those open to the idea seek to have a comfort bear made.

So, what is a comfort bear? It’s a stuffed animal created from a loved one’s favorite article of clothing ranging from sweatshirts to flannel to cotton button-down shirts. Carle Hospice organizes the event a few times a year, where volunteers turn the fabric into keepsakes for family members.

Director of Carle Home Care and Hospice Jennifer Wilken said, “One of our former volunteer coordinators heard of the comfort bear idea through another hospice connection. Because of that, we got started and continued the event to share the love and to allow family members to work on grieving.”

One of the event’s sewing volunteers has been making comfort bears since before Carle Hospice acquired it. Jean Huddleston of Champaign got hooked on making bears when her mom had a bear made for her after her dad died in 2005. She’s been making bears ever since.

“When this bear thing came up, I wanted to participate so badly, I picked up sewing again. I really, really wanted to do it,” Huddleston said.

“First bear took me 10 hours to make and was probably taken apart as many times as it was put back together. But you have to remember to practice!” 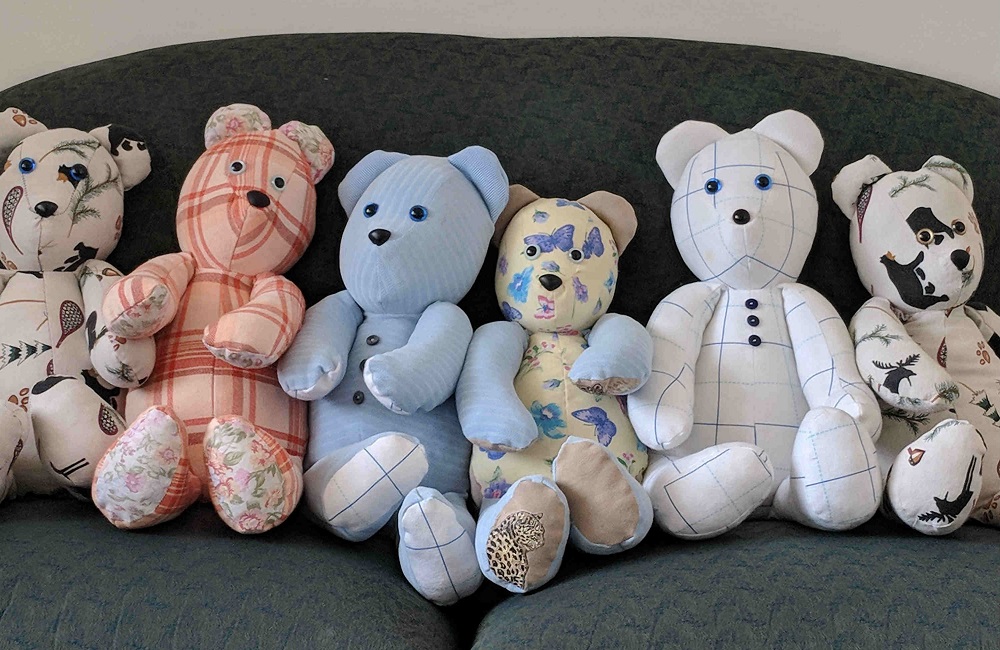 Today, Huddleston can crank out a bear in four hours and has made a total of 1,993. But to her the comfort bear event is about more than just making the bear. It’s about the experience.

“The day is about you. A day where you get to talk about the person who died. You can cry. You can laugh. There’s a lot of emotions,” Huddleston said.

“You see that you are not alone in this. You see other people who are in different stages of mourning too.”

Stephen Glasgow, Carle Marketing senior graphic designer, still raw with emotions after his wife’s death, initially thought having a bear made was a horrible idea. But he agreed, and his mother-in-law took his kids to have a bear made in memory of their mother, Dawn.

After he saw what the volunteers created from his wife’s favorite robe and jeans, he completely changed his mind.

“My daughter was 2 years old at the time, and my son was only 2 weeks old. It’s nice to see my kids have something to remember their mom by,” Glasgow said.

“The bear is a tangible thing you can see and hold that reminds you of the person you lost. My daughter would say, ‘I feel like I’m hugging Mom.’”

It’s the people and stories like Glasgow’s that keep Huddleston coming back to volunteer. Outside the Carle Hospice event, she continues making bears and doesn’t charge.

“How much is grief worth? You can’t put a number on it. When you attempt to, it lessens a person’s ability to grieve. I get so much out of making the bears,” Huddleston said.