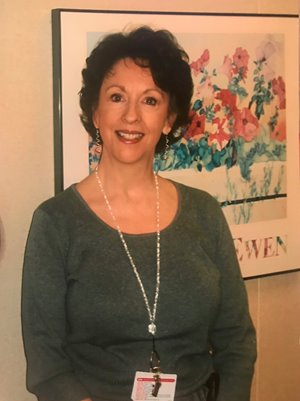 For most nurses, the commitment made to serving people in need is something that never stops, even after their official duties have long since concluded. That was certainly the case for Phyllis Wickert Rogers, MAH.

For Rogers, nursing was a 30-year second act after a short career in education, but it was a perfect fit for the one-of-a-kind mother and grandmother.

“She didn’t have to work but she was so passionate about nursing,” said Ali Boatright, Rogers’ daughter and Carle senior provider recruiter. “Once she got into nursing it was just this natural thing. It takes a very special person to be a nurse, and that was my mom.”

It’s people like Rogers who the Nurse Honor Guard was made to support. Nurses who embody the spirit of the Nightingale Pledge. The group offers a range of ceremonial services that recognize a passing nurse’s contribution to the field of nursing. It aims to celebrate not only the impact the nurse had on the community but the impact nursing had on that person.

Currently, the Guard is looking to grow their nurse participants to support more ceremonies in more cities in the region. Any nurse can volunteer to join and the time commitment is minimal, about 20 minutes each event. To learn more about joining the Nurse Honor Guard, contact hospice nurse Carol Schank, BSN, at Carol.schank@carle.com. To arrange a tribute, please call (217) 383-3600.

This effort stretches beyond Carle, too. Any nurse can join the Guard, and they perform ceremonies for any nurse.

The Guard is also looking to expand its services and hopes to add an option to facilitate a ceremony while a community member is actively dying. This approach has proven to promote a more peaceful passing for similar situations.

“It is a humbling experience, even if I didn’t know the nurse or family,” Schank said.

Devastatingly, in April 2018 Boatright and her family learned that their Phyllis had stage IV brain cancer.

“She had just retired and was traveling the world. Three days after returning from a Scotland trip she just felt off and that’s when they found the tumor,” said Boatright. “She ended up needing surgery and spent about six weeks in the hospital between the ICU and inpatient rehab. We as a family couldn’t help but notice these nurses who did everything from providing the technical care and changing the sheets. They would take care of any kind of job necessary.”

Even while a patient, Rogers’ love for nursing was apparent.

“My mom would so enjoy meeting the nurses and sharing that she was also a nurse. She was so proud to be a nurse and we were so proud of her,” said Boatright.

When things began to decline for Rogers, Schank told the family about the Nurse Honor Guard. Schank has been a member since its inception and is a main coordinator for the group.

“Being a member of the nurse honor guard is so special to me,” Schank said. “I am often told that the Guard participation is one of the most powerful and meaningful parts of the service.”

Because Schank did get to know Phyllis’ family, her Nurse Honor Guard arrangements meant that much more.

“It just sounded like such a beautiful thing. It gave us so much peace that there was this honor that represented these nurses,” said Boatright. “I love the idea of giving the full support of nurses honoring each other, they really do have this special bond that they share.”

It thrilled Boatright and her family to honor their mom with a Nurse Honor Guard tribute. The Guard and Schank worked hard to meet their requests while respecting the parameters of a traditional catholic funeral.

“At a time that is so tough and filled with a lot of difficult emotions it added this nice positive touch that these nurses would come together to honor one of their own.”

And for Schank and others in the Guard, that’s what it’s all about. Taking the time to remember those who gave so much of themselves to the industry and community.

“I think my mom would have loved to be a part of the Nurse Honor Guard. Even when she wasn’t at the bedside there was always that nurse about her. She wore a lot of different hats but being a nurse was such a big part of who she was,” Boatright shared.

Stay connected with friends and family