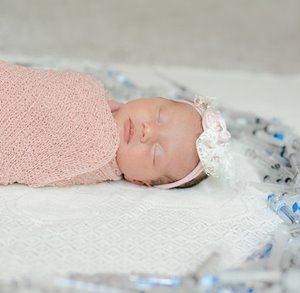 After 18 months of hormone therapies, Lauren Ramshaw was physically and emotionally exhausted.

She and husband, Jay, decided they were going to take a break. After all, she endured layers of hormone therapy that included oral medication, patches and upwards of 150 needles used for self-injections. Plus, there were multiple 100-mile trips out of state to a fertility center.

The first embryo placement in her uterus did not work. Nor did the second attempt. On the third try, Lauren became pregnant and on July 14 gave birth to their 7-pound daughter, Sloane.

“We call her the pinch hitter,” Lauren said, who became a mother for the first time at 30. “When you are in it, you feel like there is no end in sight. The hardest thing was when it didn’t work, people would say, ‘What are you going to do next?’ You just try again.”

Were the in vitro attempts worth it? You bet.

Lauren is extremely happy with the result. “Once you do have a baby (through in vitro) there is a close level of connectedness and appreciation.”

Starting in December, Carle makes it more convenient for families in east-central Illinois to use a full array of reproductive services. Patients may be seen at Carle Urbana on Windsor. For more information, call (217) 255-9600.

Lori-Linell Hollins, MD, associate medical director, Reproductive Medicine, helps patients have families through a number of techniques such as ovulation medications and advanced techniques including In vitro Fertilization or IVF.  In IVF, eggs are retrieved from a woman and fertilized by sperm from a man.  The fertilized eggs grow into embryos in the laboratory.  Usually a single embryo is placed into a woman’s a uterus and then grows into a baby at term.  Any extra embryos can be frozen for use at a later time.

“This is family building,” Dr. Hollins said, inviting individuals interested in learning more to make an appointment for a consultation about their options. “Families look differently to different people. There is no right or wrong way to build a family and it’s important to get good information.”

Infertility is the inability to conceive after 12 months of trying and it affects 10 to 15 percent of the couples between the ages of 20 and 45. For women 35 and older, the inability to conceive after six months is considered infertility.  Women age 40 and older are encouraged to seek help right away. Forty percent of infertility is due to male factors including low sperm count or slow moving sperm.

Peak fertility in women is between the ages of 21 and 33 while the fertility for men decreases over the age of 46.  Though failure to ovulate is a common reason in women, a lot of women and men are waiting longer to have children.

Carle’s program includes providing care for same sex couples using donor sperm or third party reproduction.
Egg freezing is also an option for those seeking to have eggs frozen now in order to have a child later, or for those undergoing chemotherapy for cancer treatment.  Freezing sperm is also an option for men undergoing chemotherapy as well. Egg and sperm freezing are considered ways to preserve future fertility.

For Lauren, polycystic ovarian syndrome made her unable to have a baby. The daughter of an obstetrics and gynecology physician, she said she tried all sorts of methods to get pregnant, including changing her diet, acupuncture and fertility massages.

“Who knows if we would have had a family without in vitro,” she said.

Dr. Hollins said, “Couples should consider fertility assistance if they are younger than 35 and unsuccessfully tried for a year, or those between 35 and 40 who have tried for six months and anyone over 40.”  Also, if patients have conditions like polycystic ovarian syndrome or they’ve had an ectopic pregnancy they should seek care sooner.

The science of infertility is always changing and still relatively new but not experimental. In fact, the first baby born through in vitro in the United States was in 1982, just six years before Dr. Hollins became a doctor of obstetrics and gynecology.

Dr. Hollins and the team are keeping pace to ensure patients have the best care possible for both mom and baby.

“We want you to have a healthy pregnancy and a healthy baby,” she said.

Even if individuals are not sure about help with fertility, they are encouraged to make an appointment to discuss their options, Dr. Hollins said. In Illinois, health insurance group plans that cover more than 25  employees are required to include some type of infertility benefit.

“People should have a fertility plan. Just like you decide to go to college, you need to think about when to have kids,” Dr. Hollins said.