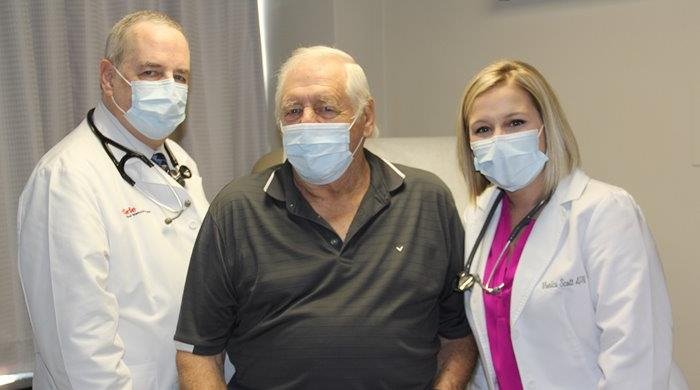 “I don’t know what else to say except I owe them my life…all of them in the Richland Cardiology office.”

When he transitioned to the current providers, his first interaction was with Raymond Fisher, MD.

“He just really cares, I could tell that from our first conversation. His knowledge and bedside manner were top-notch,” Cunningham said.

After a few appointments with Dr. Fisher, he began seeing Cardiology NP, Monica Scott. He had the same feelings about her.

“Again, I could tell that she cared and she was very knowledgable as well. I would have to say I was impressed with the whole staff, from reception to nursing to providers. I couldn’t be more pleased.”

Scott realized there was an issue Cunningham needed further treatment for and referred him to Sanjay Mehta, MD at Carle Foundation Hospital.

“I had been seeing Sam for a couple of years, so I could tell something was off when he was so short of breath he had to use a wheelchair to get to his appointments. That, in addition to a 10 pound weight gain, threw up some red flags for me and that’s when I sent him for an echocardiogram,” Scott said.

Cunningham was found to have evidence of new onset heart failure as well as issues with his mitral valve and on Feb. 11 he had a stent placed to repair an artery that was found to have 99% blockage. In addition, he was able to have a minimally invasive technique, called a Mitralclip procedure, performed on his mitral valve to reduce the leak found there without having open heart surgery.

“Sam’s condition could have been fatal had we not gotten him to Urbana when we did. I noticed he felt better almost instantly,” Scott said.

Cunningham’s positive experience with Carle Cardiology providers and staff only grew once arriving in Urbana. His interaction with Dr. Mehta and his team further solidified his confidence in the care he was receiving.

“I’ve been a patient at other hospitals throughout my lifetime and have had experiences with nurses arguing and other negative interactions. This was the complete opposite. Everyone involved in my care at Carle (Foundation Hospital) went over and above. Dr. Mehta himself also came in to speak with me on three separate occasions and that is not something you see at other places,” Cunningham said.

All of his follow-up care is taking place locally with Scott at Carle Richland. He remembers originally when coming for his appointments he couldn’t walk in the front door without stopping to take a break before continuing on to the Cardiology clinic. Now he can walk all the way to the clinic and back without taking a break.

“I enjoy seeing Sam in the office and am happy that he trusted me with his care. He is clinically doing much better thanks to the stent, mitral valve procedure and medications. I’d say he is on his way back to his ornery self,” Scott said.

He continues to credit all Carle Richland staff with his positive experience and overall healing.

“From the minute you walk in the front door it is a welcoming atmosphere. And then when you get to your appointment, you are being taken care of by friendly, knowlegable staff. It doesn’t get any better than that.”