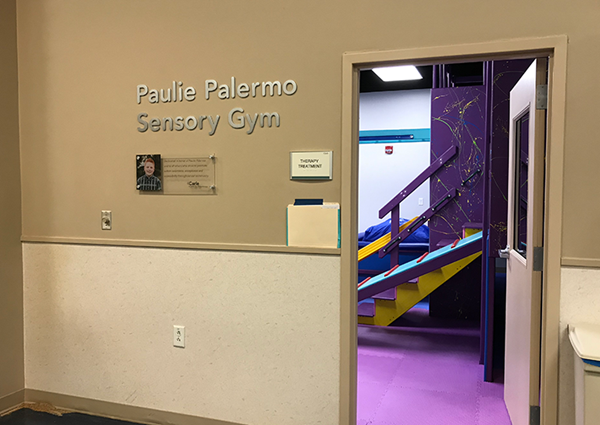 When it comes to measuring healthcare systems, the Palermos have a simple standard – what is best for their son, Paulie.

“I know that for Julie and I to consider anyplace top notch, we think of our son, Paulie, and the things that are there for him,” Mark Palermo, DO, associate medical director of orthopedic surgery at Carle, said. That’s why they were glad to champion a unique sensory-friendly initiative last year that raised $829,000 to help make Carle a more welcoming place for Paulie and others with autism. 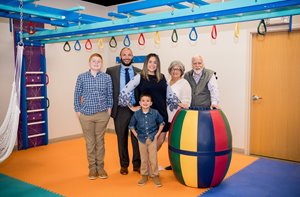 They celebrated that achievement in early May with the official opening of the Paulie Palermo Sensory Gym at Carle Foundation Hospital’s north annex. The Palermos provided the lead gift for the gym. Remaining funds, which came from the 2020 I GIVE Campaign by employees and physicians and the Carle Golf Open, also helped build a similar gym at Carle BroMenn Medical Center and will soon help construct sensory-friendly exam rooms in Carle Foundation Hospital’s Emergency Department, Carle Champaign on Curtis, Carle Olney Primary Care Center, and in the new Carle at The Riverfront development in Danville. Funds also supported staff training and created thousands of toolkits for patients with autism.

Each new space is designed to help children with autism improve their sensory responses – all while having fun in a place designed just for them.

Carle Pediatric Occupational Therapist Lauren Rubarts said completion of the gym is a “missing piece” in an exceptional program and said it had already proved its worth. Rubarts said a fellow therapist watched her nonverbal patient come to life in a test run, openly laughing and engaging with all the equipment. “This is exactly what we were looking for when requesting the proposal for this sensory gym, and I know it’s the first of many heartwarming experiences.”

“We’ve accomplished all of our original goals,” Beth Katsinas, vice president, Carle Center for Philanthropy, said as she thanked the Palermos for their exceptional efforts. “They were not just the face of our campaign; they rolled up their sleeves and became part of our team. And for that,” Katsinas said, “we’re incredibly grateful.”

As for the Palermos, they were thrilled to see the new gym open its door. “If this sensory gym was available when Paulie was younger, it would have made such an impact on his therapy,” Julie Palermo said. “Now that he’s older, we’re thrilled to see this resource become available to enhance the exceptional care the therapy team at Carle provides.”

Carle and University of Illinois partner to launch brain study