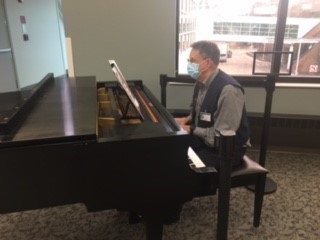 For David Hirst, playing the concert baby grand at Carle BroMenn Medical Center is like taking a sports car out for a drive. “You just want to put the pedal to the metal and have at it.” However, that would run a little counter to his job. “What you’re really trying to do is create a calming sound,” the cheerful volunteer said.

He is one of several volunteers keeping the lid down — and spirits up — at the hospital for the last five years.

There’s been a piano at BroMenn since 2009, when a generous speech therapist donated the family piano. After it wore out, along with a second piano donated by the Zion Church parsonage in Danvers, IL, an effort to bring in something more substantial began. Dory Jarzabkowsi, DO, Heart and Vascular Institute, broached the idea with Sue Seibring, manager of volunteer services, and led a team of employees in a hospital fundraising run. “Marathoners for Music” raised $6,000. Donations from a special fundraising campaign provided additional funds, enabling the purchase of the concert piano that has graced the hospital atrium since 2012.

Hirst, who also volunteers as a patient escort at the hospital, heard about the piano music from Russ Rutter, a fellow church pianist, and he decided to join the team of 11 volunteers to  keep the music flowing at the hospital.

While some play by ear, Hirst’s tunes come from a growing collection of sheet music. “I have a whole wall of binders of the American songbook,” Hirst said. “One week I’ll be playing ballads of the thirties, and the next week I’ll be doing songs from Burt Bacharach and Hal David.” Generally, however, he tries to keep things on the calm side. “You’re always kind of focusing on sending out a healing feeling,” Hirst said. In return, he often sees the reward in smiling faces and shoulders that become a little less tense. 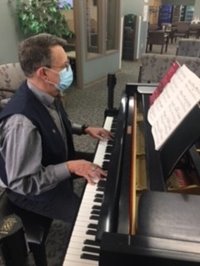 Occasionally, he even hears it in the kind words of hospital visitors who let him know his work is not in vain. Hirst remembers one exchange in particular from a Springfield family in town for a member’s surgery. “The wife came up and said, ‘I just want you to know I totally lost track of time.’” For a few shining moments, there were no clocks. No frantic hospital sounds. Just relaxing music and a reflective guest lost in the sound. “It was total escapism,” Hirst said. “And that really made me feel great.”

Like everything else, the free concerts were temporarily halted during COVID. But now they’re back. And visitors aren’t the only ones glad for their return. “The minute I heard the music, I started to cry,” a clinical director who works closely with COVID patients, said. “Finally, there was hope for normalcy again.”

Hirst, who has 520 hours of volunteer work under his belt, does it for one simple reason. “I really love that hospital. We have a great group of healers who work here, and I like adding music as part of the healing experience.”