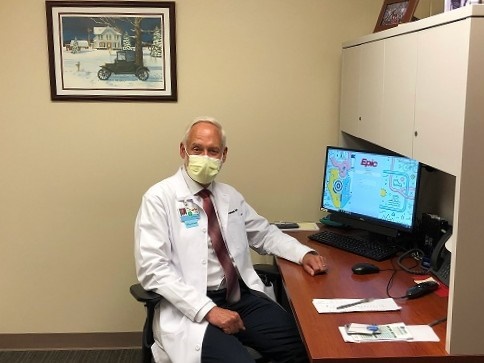 If your doctor is unavailable for your appointment, you may find yourself meeting with Paul Schaap, MD, a semiretired physician who can call on his 32 years of experience to help patients.

Scaling down his practice since 2016 to have more time to enjoy family, the outdoors and coaching track and field at a private school, Schaap has the experience and interest to be an internal floating physician, or locum tenens, which he has been since 2019.

“Over several years I’ve been a wanderer,” he said.

Early on he worked at the Carle Addiction Recovery Center in Champaign. After that the list of stops included Carle Tuscola, Carle Mattoon on Lerna, Carle Champaign on Curtis, Carle Urbana on Windsor, Carle Mahomet and even doing virtual health visits from a spot in the call center at Carle at the Fields in Champaign.

“One day I went from Mattoon in the morning to Windsor in the afternoon,” he said. That is a drive of 47 miles.

Sally Salmons, MD, associate chief medical officer for Primary Care, said using a floating doctor is not new at Carle and the practice helps with a continuum of care when a physician moves out of state, is out for illness or uses vacation time.

“This is a purposeful way to manage a practice, let patients know there is someone to care for them and help them keep their needed appointments,” she said. “The individual needs to be a special person in terms of management style with patients.”

Being a floating doctor can allow someone to begin slowing down their schedule of regular patients, but there

was a time at Carle when new physicians on the opposite spectrum of their careers floated throughout the system. Frances Kramer, MD, was one of those, starting at Carle in 1990 and working for three years at Carle locations in Rantoul, Tuscola, Charleston, Gibson City and Bloomington.

She said she learned a great deal about the communities Carle served, seeing a wide range of patient lifestyles, from the impoverished to those who walk into an appointment carrying their own medical literature. She vividly recalls a farmer walking in to her office one day carrying his thumb in a plastic bag and directing him to an emergency room. There was also a rather challenging case of a laborer who arrived at the office with a large screw through the bottom of his work shoe and into his foot. With help from a power tool, she was able to quickly unscrew the screw.

Being a floating doctor, puts “a fresh set of eyes” on a health concern and for a patient that can be helpful, Kramer said. 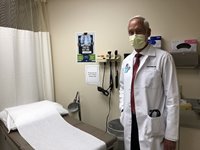 Dr. Schaap came to Carle from South Holland, IL because he could be away from the city and get inspiration from the practice of Carle’s David Webb, MD. He moves from four to two days of work a week in August when his focus turns to assisting with physician candidate interviews and also practicing medicine alongside Carle Illinois College of Medicine students during Wednesday evening clinics at Carle Champaign on Curtis.

Schaap said he most enjoys meeting new people who may be struggling with their health and having the chance to help them. “You have to be flexible and meet them where they are.”

Cardiology fellowship to begin in July 2022