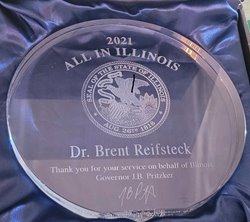 Despite stormy weather on the Illinois State Fairgrounds cancelling this year’s fair parade, grand marshal Brent Reifsteck, MD, and 10 other healthcare workers chosen for the honor enjoyed lunching at the Illinois governor’s mansion and received an individual award of appreciation for service from Governor J.B. Pritzker.

The honor bestowed on Reifsteck came about by a nomination from Champaign-Urbana Public Health District Adminsitraot Julie Pryde, Reifsteck said. Someone from the Illinois State Fair contacted the pediatrics area at Carle Foundation Hospital one day and asked the pediatrician to attend the first day of the fair as a grand marshal.

“It was unexpected and I am so honored,” Reifsteck said.

The 11 healthcare workers were chosen from each of the 11 state-designated COVID regions.
The ribbon cutting at the parade, walking the 1.5-mile route in the parade, a tour of the fairgrounds, enjoying fair food delicacies, seeing the butter cow and connecting with Villa Grove High School classmate - now Illinois State Police Trooper Tracy - were all cut short due to the severe weather conditions on Aug. 12.

However, during the one-day trip to Springfield, Reifsteck and his husband enjoyed the luncheon ceremony as well as mingling with the governor and First Lady MK Pritzer, plus a tour of the Abraham Lincoln Presidential Library and Museum led by the executive director.

“There are so many healthcare workers I work with each day who deserve the recognition and I like to think in some small way I represent the care and giving all of them provide for patients,” Reifsteck said.

Illinois has two state fairs – one in Springfield and one in DuQuoin (about 90 miles southeast of St. Louis, Missouri). Healthcare workers may participate on opening day at both fairs and Reifsteck said he plans to attend opening day of the DuQuoin State Fair on Aug. 27 – hopefully without severe storms.

Ankle surgery puts university student back in the air