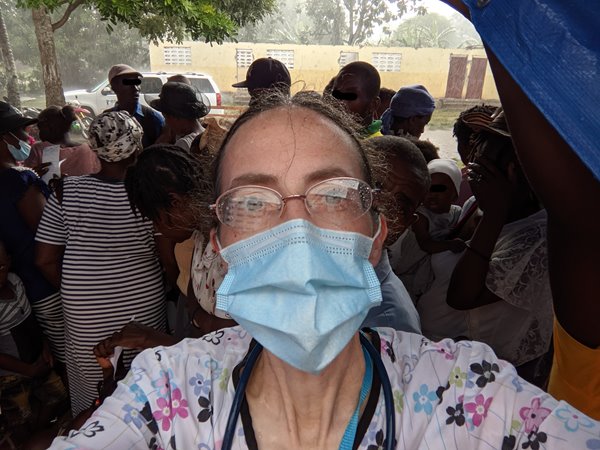 Helping the poor in Haiti is something Carle’s Vera VanderZee, RN, considers a moral obligation. A trip there in August to help earthquake victims in the Les Cayes region was her seventh trip to that country, and her second trip with Chicago Friends of Haiti, a non-profit network of churches and individuals rooted in the Chicago Metro Presbytery of the Presbyterian Church in America, and dedicated to serving the people in Haiti.

Originally planned for the end of July, the trip was cancelled for security concerns when Haitian President Jovenel Moise was assassinated. After the August 14 earthquake that affected about 800,000 people, the Haitian leadership of ESMI (El Shaddai Ministries International) reached out to Chicago Friends of Haiti and requested a medical team. VanderZee said she was fortunate her Carle Foundation Hospital supervisor, Shaylee Hayes, RN, manager, Pediatrics, was flexible with her last-minute time-off request and made it possible for her to join the other eight team members for the outreach.

VanderZee said the week she spent at Carle in training with interpreter services and her experience in Spanish interpreting at Carle is helpful in Haiti with having to work through Haitian Kreyol interpreters, most (or all) of whom had no formal training. 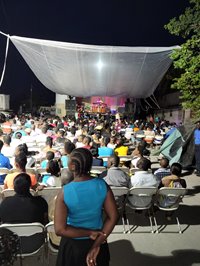 “My training and experience at Carle helps me sense how much information to give at a time before pausing for the interpreter and it gave me confidence to reign in interpreters when they launch into independent conversations with  patients. They need assurance that it's okay to stop and ask for clarification and that to do so is better than to pretend to understand and give a "best-guess" interpretation,” she said.

Her first trip to Haiti was in 2009, a year before the 2010 earthquake affected nearly 3 million people near Port-au-Prince, the capital.

Though not originally in the plan, the team spent much of the time at Cavaillon orphanage due to heavy rain that shortened one clinic day and a flat tire on another day. VanderZee said it is remarkable how behind in growth the children are due to lack of proper nutrition. A 5-year-old boy who sat in her lap seemed more like a 3-year-old in size. The children were so happy to receive a gift of two soccer balls, a treat and fresh water. Women who care for children at the orphanage received personal hygiene products in Carle bags, courtesy of Carle Human Resources. Carle also donated $250 of storeroom supplies.

“What impresses me about the people is their sharing and positive attitude. When I was volunteering years ago at Marantha Orphanage, children would take a bite of food and pass the plate to another child. The capacity of the poor to share is stunning,” VanderZee said. “What little they have, they share. They are joy-filled and thankful.”

Her team set up a clinic in a LaHatte church next to another orphanage and then later in the region of St. Louis del Sud where there was an actual clinic with rooms, some beds and tables. The long drive there took them past many damaged or destroyed homes and makeshift dwellings made of mostly sheets hung on sticks.

“At clinic we saw a range of patients from the very elderly to the very young with a variety of ailments, some earthquake-related but others not. Some that stand out was the infant whose mother said she found 6-inch long white worms in her baby's diaper, a 2-year-old treated for gonorrhea/chlamydia, and a young girl who got a nebulizer treatment thanks to power from a car adapter activated by foil from a medication packet,” she said.

There are people there who survive days without eating anything, VanderZee said. “They are defying the odds.”

“I think working at Carle has made me much more comfortable with special needs children. One mother came to the clinic  in St. Louis del Sud with a pre-teen special needs son who has a chronic untreated seizure disorder. The boy sat quietly, looking down at the floor and not making eye contact, while those around him talked about him.  What came through interpretation was he had been like this since birth and, ‘He has no brain.’  I explained to my interpreter the boy indeed has a brain and later learned the Kreyol phrase for a child with developmental delay is ‘Tet pa la,’ literally ‘Head not there.’"

VanderZee said she told his mother it is unlikely anything can be done for his congenital condition, and the team had no  anti-convulsants, but she could speak with one of the doctors. “I directed my attention to the boy and energetically said,  ‘Bonswa!’ (Good afternoon). He looked up at me, smiled from ear to ear, and replied ‘Bonswa!’ with just as much gusto.  He lifted his arms to invite a bear hug, which I gladly obliged. It was one of the happiest moments of my week,” she said.

Ankle surgery puts university student back in the air