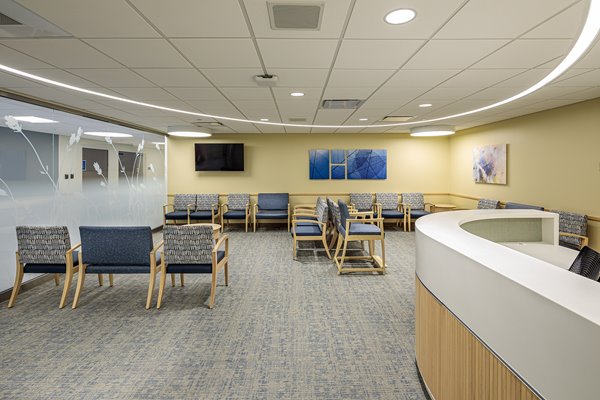 You know you are about to enter a special place at Carle Foundation Hospital when you pass by the etched glass walls reminiscent of a spa waiting area. 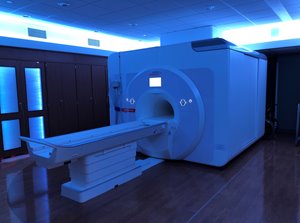 After passing rooms where smaller MRI scanners are located, you reach the Siemens Healthineers MAGNETOM Terra 7 Tesla (7T) MRI scanner. At 37,000 pounds, the high-powered magnet for the scanner is so large it required building renovations, a crane and closing part of a street during installation. To look at it now, the 7T is housed in a purposefully uncomplicated space where patients can be bathed in a light color of their choice during a scan of their knee or brain.

“We put a lot of effort into making the room with some spa-like features,” Kelly Oppe, director, Radiology said, explaining that the tight space inside the scanners often makes patients nervous. The ambiance, however, does not minimize the power behind the magnet. In fact, anyone who plans to enter the control room adjacent to where the machine is housed is first asked if they have a pacemaker or a cochlear implant because standing too close could scramble those devices.

While the 7T is used clinically for direct patient care, it is also central to a collaborative research effort by Carle and the University of Illinois.

“We are learning a lot,” said Sina Tafti, a clinical research scientist with Siemens, who has been on site with the
7T to provide technical expertise and real-time support since it arrived. There are only a handful of sites in North America with a MAGNETOM Terra 7T system, an FDA-approved clinical MRI scanner, and only a few of those sites use the scanner for clinical imaging, he said. In the Midwest, only Carle Foundation Hospital and Mayo Clinic in Rochester, Minnesota have the MAGNETOM Terra 7T, and soon the University of Missouri will have its own, Tafti said.

Thanks to a gift from the Stephens family, eight research projects underway include the brain and epilepsy, traumatic brain injury, brain/heart interaction, cancer, and retina research. Jennifer Eardley, vice president of Research at Carle Health, said, “We are grateful to the Stephens family for their visionary support of translational research.  These projects lay the groundwork to advance 7T MRI utilization and bring new approaches to diagnosis and treatment.”

Bruce Damon, co-director of the Carle Illinois Advanced Imaging Center and director of Clinical Imaging Research for the Stephens Family Clinical Research Institute at Carle Health, said, “The Center has some innovative projects that are attracting regional attention.  We are also thrilled to see the partnership between Carle clinicians with University researchers leading to external research support from companies and research centers.”

Closer to home, Damon added that medical students at Carle Illinois College of Medicine are working with physician investigators. “The 7T is very well matched to the engineering aspect of medicine.”

“Our institutions have worked together tirelessly to successfully launch a productive and promising high-field imaging enterprise in Champaign-Urbana,” she said.

The university has two externally funded projects on the scanner set to launch in the coming months. The team will begin accepting faculty-led pilot project proposals in the New Year.

“On the collaboration front, we are very excited to launch the Champaign Urbana Population Study that will be jointly directed and funded using neuro-imaging data as a foundation for future studies,” Wszalek said. “We will study more than 300 volunteers from age 18 to 80 regarding factors that affect the aging process.” 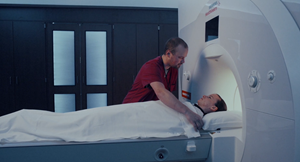 On the clinical side, the use of the 7T started this spring with scans of knees and brains. As large as the magnet is that drives the equipment, the word micro is commonly used when describing what the 7T can show – such as micro bleeds in the brain, micro tears in the meniscus.

Blake Weis, MD, Neuroradiology, said, “7T MRI is a powerful tool in our toolbox that will not completely replace other field strength MRIs, but rather be selectively applied in circumstances where further resolution is particularly helpful (tiny hemorrhages in the brain after a concussion, or exact focus causing seizures in a child). These applications will multiply in coming years and we will help define them.”

Graham Huesmann, MD, Neurology, said, “The 7T has been used as a research tool for some years to look at patients with epilepsy, but to have it available also as a clinical tool is really exceptional and will greatly improve the quality of care for our patients.”