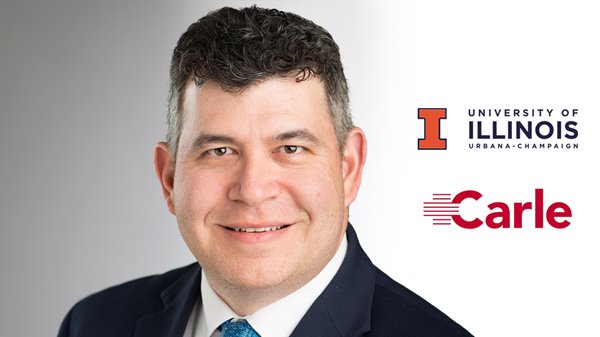 Dr. Mark S. Cohen will be the next dean of the Carle Illinois College of Medicine and senior vice president and chief academic officer at Carle Health, pending approval by the University of Illinois Board of Trustees. The appointment takes effect May 16.

Cohen is currently a professor of surgery and pharmacology at the University of Michigan, where he also serves as director of the Medical School Pathway of Excellence in Innovation and Entrepreneurship, director of endocrine surgery research and innovation chief at the University of Michigan Rogel Cancer Center. He earned a bachelor’s in chemical engineering and a medical doctorate from Washington University in St. Louis.

“Dr. Cohen brings a clear, compelling vision for a bold and ambitious future for Carle Illinois,” said Illinois Chancellor Robert J. Jones. “This is the first college of its kind in the world and it is already established itself as a home for innovators and pioneers. Our next dean embodies that same spirit and it is going to be exciting to watch this college advance in every phase of its mission under his leadership.”

"As a physician and engineer with deep experience in medical education, research and in particular his expertise developing and bringing to market medical advances, we believe Dr. Cohen will lead Carle Illinois toward its increasingly bright future," said James C. Leonard, MD, president and chief executive officer, Carle Health. "His work at Carle Illinois will result in care delivery innovations for patients in Illinois and beyond."

Cohen’s clinical interests and national expertise are in the areas of endocrine surgery. He has written and published 115 original articles, twelve book chapters, a textbook on Medical Innovation and Entrepreneurship, and his research has been externally funded by the Susan G. Komen Foundation, the American Cancer Society and the National Institutes of Health.

King Li, hired in 2016 as the inaugural dean of the Carle Illinois College of Medicine, announced in 2021 his plans to retire.

More than 80% of the college’s students have backgrounds in engineering, advanced mathematics, computer science and other quantitative science disciplines. Courses are designed and co-directed by teams that include a basic scientist, a clinician and an engineer. The first Carle Illinois graduating class will enter residency in summer 2022.

Doctors' Day: a thousand thanks to our physicians