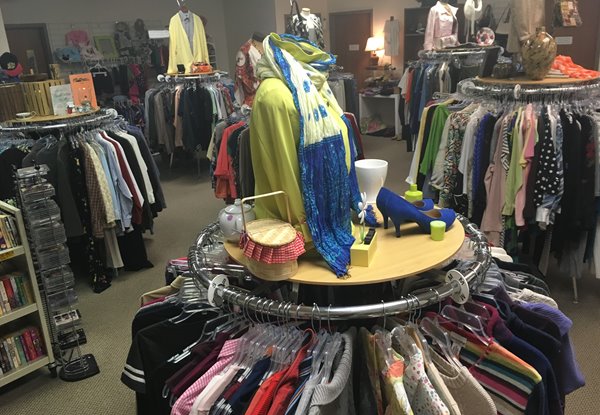 Half the fun of shopping at the Carle Auxiliary Resale Boutique is seeing what comes through the door. “You never know what you’re getting,” said Shelly Williams, retail manager of Carle Volunteer Services. It might be an exquisite Rookwood vase, a vintage wedding dress, or – occasionally – an item so unusual that nobody knows what it is. Williams remembers one donation in particular that had everyone scratching their heads.

“It was like a big, round silver ball with these long feet coming off of it,” she said, describing an item that sounded more alien than antique. It turned out to be a very stylish grapefruit squeezer, which brought $75, and just like all store sales, those dollars went to a great cause.

This year will mark 10 years since the store opened at the corner of University and Lincoln in Urbana. And since its grand opening on April 19, 2012, it’s raised more than $165,000 to support the Carle Auxiliary Guest House and the Auxiliary Nursing Excellence Awards. “We’ve been thrilled with it,” said Marty Edwards, who was president of the Auxiliary when the idea was first conceived.

Edwards said it all began in 2009 when she and a few other volunteers attended an Illinois Hospital Association retreat. “One of their workshops was about how effective retail thrift shops were to the auxiliaries in the state, and after we attended the workshop, we thought ‘Oh, my gosh! That would be such a great idea.’”

The Auxiliary brought the idea to Carle management, who embraced it, providing the location and some unused storage racks. The gift was very much in keeping with the green theme of the store, which aimed to provide a way for local residents to recycle things they no longer wanted while providing high-quality, lightly used items with a second life.

"From the get-go, we wanted the shop to not be a jumble of junk,” said Edwards, who currently chairs the Resale Boutique planning committee. “We really were focused on it being a boutique, and that’s how we got the name.”

It's always been more than a store, Williams said. “It fulfills a lot of community niches.” The boutique often provides free clothes and other necessities to patients who may have arrived at the hospital in an emergency. They’ve also donated many clothes to the men’s emergency shelter and Healthy Beginnings over the years.

Then there’s the social aspect that the store provides. “We have customers who come every Tuesday because they got to know the ladies who work on Tuesday, and they like to visit,” Williams said. Some have even become volunteers, joining a team of 27 hard-working Auxilians, many of whom have been there from the start. “They’re really, really dedicated people.”

As for the future? “We’re hoping that one day we’ll be able to expand,” Williams said. “We could do a lot more with estate sales and that kind of thing. And, of course, having larger items would significantly increase our fundraising capabilities.”

In the meantime, however, they’re focusing on anniversary celebrations, which will take place later this spring, according to Edwards. “We’re working on plans now.” So keep your eyes peeled.