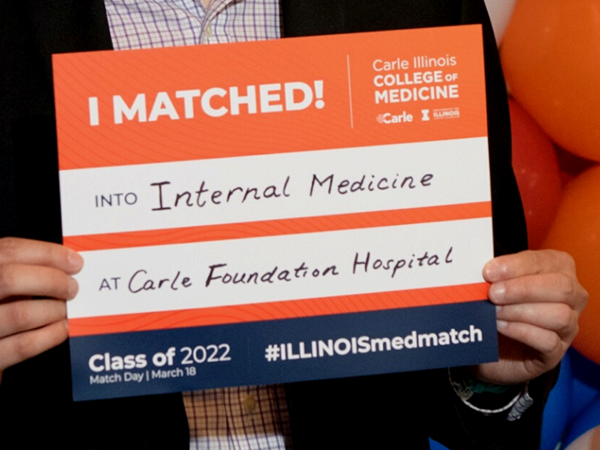 Two of Carle Illinois College of Medicine’s first graduates are giving back to the community that helped support their medical education, staying in central Illinois for the next stage of their medical training. Carle Illinois’ inaugural class members Andrew Chang and Phani Gaddipati will start their medical residencies at Carle Health in July, working in internal medicine to diagnose and treat patients.

program. He served a month-long sub-internship in internal medicine at Carle and was impressed with the system’s advanced technology and its culture. “As an organization, Carle is hungry for innovation and quality improvement, and there is a huge ‘yes’ culture when it comes to improving patient care.”

“Welcoming graduates of the first class to Carle is very gratifying as we move forward in training doctors to use engineering and medicine to be innovators, solve problems, and care for patients,” James C. Leonard, M.D., President and Chief Executive Officer of Carle Health said. “Expectations for Carle Illinois College of Medicine residents are high as they enrich their experiences by working alongside distinguished Carle medical professionals to make new discoveries that benefit the entire region and beyond.”

Chang hopes to continue to innovate at Carle Health by advancing a project he started during medical school. “I am a co-founder of ProteCKD, which is studying the feasibility of bringing chronic kidney disease screening to the local community,” Chang said. “We recently received institutional review board approval from the University of Illinois, which is a significant milestone, and I am so excited to continue this work.”

While Chang will serve a three-year residency at Carle Foundation Hospital, Gaddipati matched into diagnostic radiology at University of Washington. This complex specialty requires a preliminary year in internal medicine to provide a strong foundation, which Gaddipati will serve at Carle before embarking on his four-year radiology residency at UW in 2023.

Both UW and Carle have a wide geographic reach, making each a prestigious training ground for physician interns like Gaddipati and Chang who are looking to make a broad impact on patient care. “Carle has a really wide catchment area and sees a huge variety of patients and pathologies,” Gaddipati said. Chang says Central Illinois’ diverse patient population creates a unique opportunity for interns to help treat unusual or complex patient problems. “At Carle, I routinely saw cases I would expect only to see in a Chicago academic hospital,” Chang said.

contribute quickly and efficiently to patient care. “In doing medical school here, I have a sense of the community resources that are available for patients, including discharge facilities in the area” Chang said.

As a member of Carle Illinois’ inaugural class, Chang sees residency as a chance to expand on his community involvement. “Having received a generous scholarship donated by members of our community, I love being able to give back by doing residency here,” Chang said.

Chang says he’s enjoyed the privilege of watching Carle Illinois develop and grow its medical education program, and he hopes to continue to contribute as a clinical affiliate of the college during his residency.