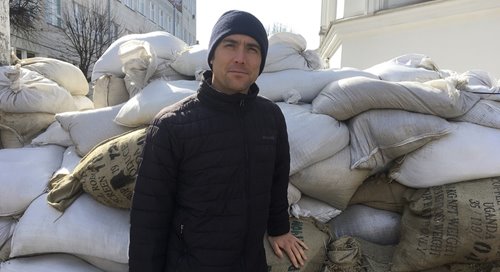 For Carle Foundation Hospital’s Judah Slavkovsky, MD, normal work means handling trauma and general surgery emergencies. Recently, however, on two occasions, he stood with his fellow surgeons in Ukraine to train them on trauma techniques, including handling major blast injuries.

“These are our medical colleagues, and I feel solidarity with our Ukrainian counterparts,” Slavkovsky said. A general surgeon for five years, Slavkovsky arrived at Carle in November 2020. He became involved with assisting Ukraine while helping with warehouse medical aid through Ukrainian Medical Association of North America. It was there that he met someone connected with MedGlobal, a humanitarian and nongovernment organization working to provide innovative free and sustainable healthcare in vulnerable countries.

“The whole world feels significant empathy for Ukraine, and I wanted to engage in a meaningful way,” he said.
Never having traveled to Eastern Europe, Slavkovsky has recently traveled twice to Lviv and Zhytomyr. “I had some trepidation going,” he said. However, he felt safe working inside hospitals, not near the eastern side of Ukraine, where substantially more conflict exists.

Many recognize the strong will and skill of the Ukrainians during the conflict with Russia, and Slavkovsky said, “I 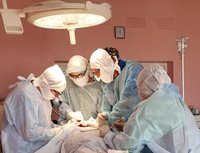 am amazed how those colleagues are leaning into this with such determination.”

Many of the medical staff he worked with were in their 30s and 40s and older, and they clearly remember what their country was like under Soviet rule. “One person said those 15 years were a waste of her life,” he said. “There is an understanding there is no peace under occupation.”

The Ukrainian colleagues brought a “refreshing earnestness” to learn about trauma care which took many of them back to their early years in medicine, Slavkovsky said. For instance, there was a former pediatric oncologist caring for a platoon of 500 Ukrainian soldiers, he said. “That is a big step.” 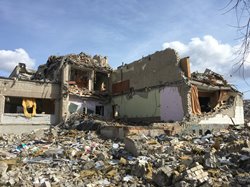 The training Slavkovsky did involved triage drills wherein medical staff quickly identified critical patients and established initial trauma priorities for each patient. Another area of great interest was damage control techniques that allow trauma patients to undergo short surgeries at the beginning of their hospitalization, working only on priorities like hemorrhage. Later they underwent more lengthy repairs. Unlike life under normal circumstances in a hospital, medical personnel in Ukraine are preparing to treat large numbers of people all at once – such as after a missile strike blast.

Slavkovsky participated in a handful of surgeries himself while there. Whether through surgeons working to repair war injuries, or a farmer who thinks it is his patriotic mission to plant his wheat crop, the dedication and courageousness of the Ukrainian people are there each day, he said.