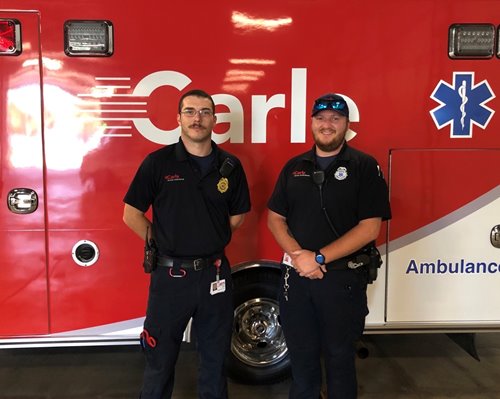 For those who work at Carle’s Arrow Ambulance, saving a life is what they’re all about.

But on May 31, four Arrow team members worked together to save a life in a different way.

An Arrow dispatcher was monitoring 911 calls and picked up on one sent to a rural volunteer fire department about smoke coming from a home with a possible occupant inside. According to Michael Smith, MD, medical director, Carle EMS, when the dispatcher realized there was no immediate reply from the fire department, she contacted the 911 center and asked to send Arrow to the scene.

John Sollars, Arrow operations manager, east region, arrived first in his supervisor vehicle and Bryson Freehill, paramedic, and Derek Shreves, Champaign lead paramedic, both former firefighters, arrived a bit later in their ambulance. A mobile home was on fire, and fire crews weren’t yet at the scene.

“We were still kind of confused about what was going on.” Freehill said. “We didn’t hear about a victim on the way there. The neighbors were outside saying the homeowner was still inside.”

Typically Arrow’s role is to assist when a resident or a firefighter needs medical attention, not to fight fires or rescue occupants.

“They said they had heard her at the back bedroom window,” Shreves said. “We went back to see if we could talk to her, coax her out of there. She was in the bathroom.”

“My impression was she wasn’t going to leave on her own,” he said.

Sollars was at the front door of the residence where there was heavy smoke and heat. At the rear of the home, Freehill and Shreves used a crowbar to punch through the rear door. The conditions were better there, and they located the elderly occupant and brought her to safety.

Dr. Smith said they had the victim outside receiving medical treatment before the first fire company made it to the scene. She was then transported in good condition to a hospital by a different ambulance crew.

“What our crews did in the course of this emergency response goes well above and beyond the standard that we expect as an organization,” Dr. Smith wrote in a letter to the Arrow team and Carle Foundation Hospital leadership. “We use the word ‘hero’ perhaps too often in the healthcare industry – and yet here it truly seems inadequate. Without the actions of each of the four individuals participating in this response, there is a high likelihood this lady wouldn’t have made it out alive.”

When you ask the Arrow team if they are heroes, they humbly say they were just doing their jobs. Shreves said it’s part of the profession they’ve chosen to find themselves in less than ideal situations on a fairly regular basis. In this case they responded to a need and found a way to make things work.

Still there is some satisfaction in this story for them, especially because things don’t always work out.

“It’s easy to get bogged down in the mundane sometimes,” Shreves said. “When you are 18 years old and getting into this profession you think it’s going to be glory and saving lives and kissing babies. This is a one in a million, I think. When you have a patient with a good outcome, those are a little extra special. This one was probably a little more because of the situation.”

“Having these two guys with fire backgrounds on the truck that day, having an attentive dispatcher, and an ops manager who happened to be close – it all lined up,” Stalter said. “But when you have great people around you, great things happen. It says a lot about our people and how they reacted in this situation –and other situations on a daily basis.