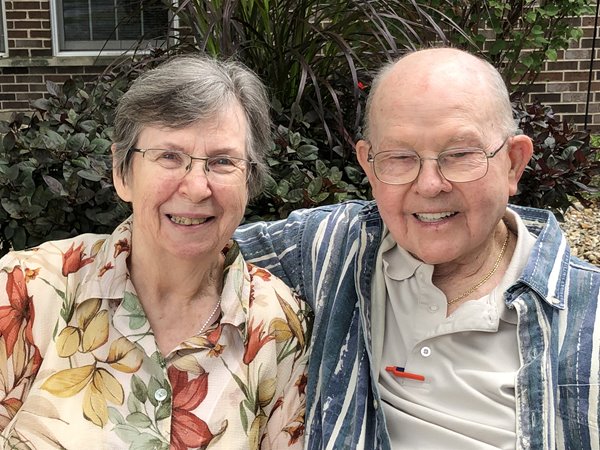 To see Richard and Sara Foster eating lunch together at Windsor of Savoy is like watching any loving couple married for 61 years.

A former social studies teacher for 29 years who also taught driver’s education and helped out as janitor and bus driver at a school in western Illinois, Richard talks about their busy life as a young couple while ordering lunch for him and Sara, diagnosed with dementia.

“She gets 99% of the credit for raising the children,” he said. He also pointed out that Sara worked 18 years as a brand office administrator for a financial investment firm. “I’m so grateful she kept me,” he said.

The Fosters were living in assisted living residences at Carle’s Windsor of Savoy complex but medical circumstances changed and now they are both living in the recently renovated spaces called the Barbara and Merrill Huffman Memory Care Suites.

Thanks to a generous donation from the Huffman family to Carle Health Center for Philanthropy, there are nine one- and two-bedroom apartments available to provide an additional level of care. Individuals at Windsor of Savoy may live independently in one of 138 apartments or in one of 27 assisted living apartments or in memory care with the added security and structure needed for adults with dementia.

“As their care needs increase, it is nice continuing to have them living at Windsor of Savoy where they already 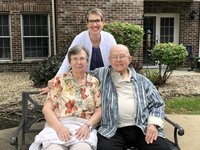 are familiar with the staff and property,” the Foster’s daughter, Ann Quackenbush, said. She moved her parents to Windsor of Savoy from western Illinois so they could be closer.

“There is nothing as great as family,” Richard said. “I would tell people to move in as soon as possible.”

Sara stayed mostly quiet during lunch but she did point out her husband’s sandwich slicing skills. “He is good at cutting up the food because he did that when the children were younger,” she said. 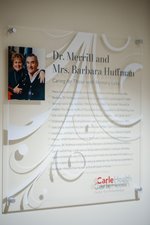 About the donors: Merrill Huffman, MD was an obstetrician-gynecologist for nearly four decades. His wife, Barbara grew up in Champaign and was a life member of the Carle Foundation Hospital Auxiliary.

The suites feature 24-hour on-site availability of a specialized nursing and caregiving staff – certified in dementia care by the Alzheimer’s Association®.