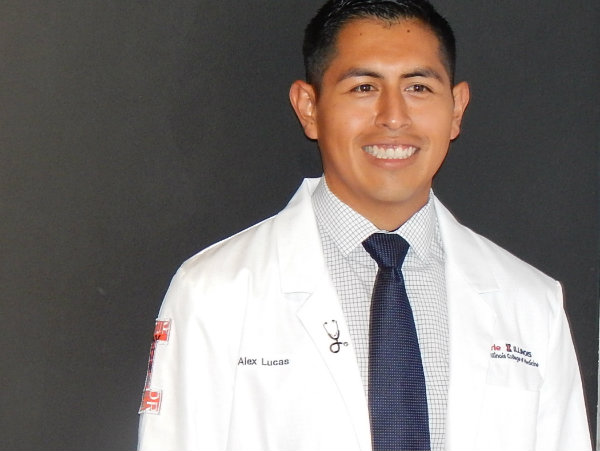 Some say it’s never the wrong time to go back to school. And while others may scoff, some take it to heart to pursue their dreams.

Alex Lucas, 28, son of Larry and Gina Lucas of Bridgeport, is a chemical engineer by trade. After graduating from Red Hill High School in 2008 and the University of Illinois in 2012, he honed his craft for six years in Texas and Chicago. Still, one thought always resided in the back of his mind: medical school.

“What prompted me to pursue medicine was some of the passion I felt when I was volunteering and shadowing,” Lucas said. “When I saw doctors solving problems like engineers within the hospital, I realized my chemical engineering background would transfer pretty nicely.”

And after peeking behind that curtain, there was no chance of closing it again.

Hooked, Lucas looked at medical schools and found one that really spoke to him – the new Carle Illinois College of Medicine at his alma mater. When the school announced it would provide full four-year scholarships for its inaugural class, Lucas couldn’t apply fast enough. To his excitement, his acceptance package from world’s first engineering-based college of medicine soon arrived.

“Chemicals kind of translate into medicine,” Lucas said. “Chemical engineering has a lot to do with fluid flow, mass transfer, heat transfer, and all that stuff is going on in the body pretty much all the time. So, as I get a little further into my medical studies, I’m hoping my background actually gives me a little advantage.” 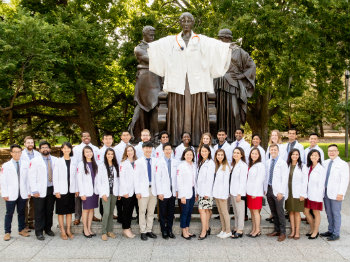 “What really interests me is Carle Illinois College of Medicine is trying to build a new type of position, one that aims to innovate and optimize the healthcare industry,” Lucas said.

“I think this will translate into positions that are not only working as daily clinicians but being leaders in their field, using the most up-to-date technology.”

About a month into medical school, working with his cohort of students – all different ages, backgrounds, ethnicities and experiences – thrills Lucas.

“I’m excited to see how we all blend together and bring these diverse ideas together, eventually collaborate on different projects, and even try to bring some new technology forward and hopefully make that useful even after we graduate,” he said.

During his fate-filled job-shadowing experience, Lucas especially enjoyed his time in the free clinics where doctors volunteered to treat people who weren’t insured.

“Every single doctor was impressive in the fact that they were pulling strings to get people to different places and navigating their time within the system to really help people that don’t have any idea how the system works and couldn’t pay for it,” Lucas said. “Seeing all the doctors that actually liked their job really helped cement in me that I can do the switch.”

Lucas hopes to one day open a series of free medical clinics where he could work both as an administrator and a clinician. Lucas admits he was apprehensive about resuming school because of his age.

His family supported him and pushed him in the right direction.

“Growing up, I had a lot of positive influences from my family. They were very positive in saying, ‘You can do whatever you want to do,’” Lucas said. “My grandpa always told a story of how he went back to school at age 28, and that definitely helped me.”

To learn more about the Carle Illinois College of Medicine and to support physician innovators, please call (217) 300-5700.