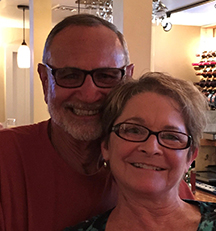 Imagine an annual health screening with no needles, no medication, no fasting and no changing out of your clothes. Most importantly, it can catch lung cancer early and potentially save your life.

Lung cancer is often found in its late stages when symptoms surface leading to severe challenges and a reduction in successful treatment options for the patient. This easy screening can detect lung cancer before any symptoms develop.

“Of course the word ‘cancer’ means nothing but fear,” said Charles “Pat” Stuttle of Mattoon. “I feel very, very lucky that the early detection was available.”

Stuttle started smoking cigarettes 55 years ago. He was 18 and a combat engineer in the U.S. Army where every meal included free packs of cigarettes. He served in Vietnam, stationed in country for 397 days.

The low-dose computerized tomography (CT) scan revealed a nodule “the size of a peanut without the shell” in his left lung, he said. After three radiation treatments to eliminate the nodule, he is ready to go to Florida for the winter with his wife, Teresa, and return for an exam in April at Carle Cancer Institute in Urbana. He quit
smoking.

Carle offers low-dose lung cancer CT screenings in Urbana, Danville and Normal by obtaining images of your body’s tissues and organs. “The screening is like a traditional CT scan, but with much less radiation,” Karina Parke, NP, Carle Pulmonology/Oncology Services, said.

Those who qualify for the screening are: Parke said the screening detects lung nodules in the chest, as well as other abnormalities of the upper neck, abdomen and heart.

The goal is to save lives, and studies show lung cancer screening can reduce the mortality rate by 20%.
Just like a mammogram, yearly bloodwork or a colonoscopy, the low-dose lung cancer screening should be part of your care if you are 55 or older and have smoked for many years, Parke said.

“Most of the time we identify something after a person’s third or fourth screening,” Goveia said, reinforcing the importance of keeping up to date with the screening annually.

“Lung cancer screening is still so new, the reminder is not built into patient schedules,” Goveia said.
In addition to the lung cancer screening, Carle offers tools such as nicotine replacement therapies and oral medications to help patients who want to stop smoking. Counseling is also offered on an individual basis and in a group setting.