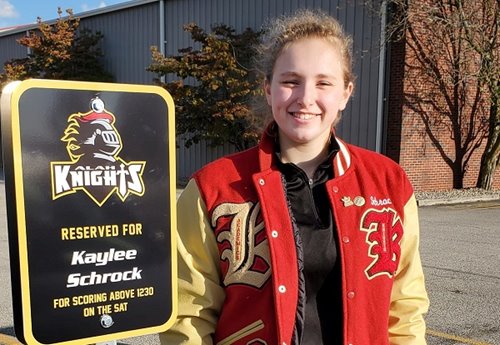 Kaylee Schrock vividly recalls when a complete tear in her ACL (anterior cruciate ligament) occurred. It was Senior Night, March, 2021 and her volleyball team, the Arthur-Lovington-Atwood-Hammond Knights were playing the Arcola High School Purple Riders.

“It was a pretty scrappy game. I went up to get the kill and my knee turned into jelly,” she said. “I fell and then I closed my eyes tightly.”

Her father, Matt Schrock said, “It was a perfect approach, perfect landing, but she went down immediately. The nightmare of every parent of an athlete unfolded right in front of me.”

The high school athlete, who also previously participated in competitive dance, cheer and club volleyball, not only tore the ACL but also had a small tear in her left knee of the meniscus, which is cartilage designed to absorb shock between the shinbone and the thighbone.

Matt Schrock said his daughter tried walking off the floor of the competition and her goal was to return to play in a month. Unfortunately it was not until Jan. 2022, after surgery and therapy that her doctors cleared her to participate in practice. Robert Bane, MD did the repair in surgery and then Kaylee worked weeks with Carle’s Kathleen Morrison Bazzell, MS, ATC, CNC, YES, and Christopher Santarelli, ATC to rehabilitate.

“I put more trust in them than I did most people. I am handing you my career. Take good care of me,” Kaylee 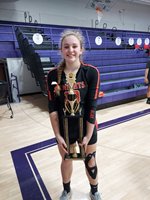 said. “I don’t think I could have done it without both of them.”

Matt Schrock said Dr. Bane was very confident in orthopedic surgery, but never dismissed what his daughter was asking about or feeling. “Chris and Kathleen were very understanding of the mental stress Kaylee was experiencing on the road to recovery. They did a great job of taking care of the whole person.”

Kaylee started rehab twice a week before her surgery at Carle Sports Medicine to strengthen the muscle and make recuperation easier. Until she had a second surgery to remove scar tissue, she could not completely straighten her leg at the knee.

What made the relationship with the trainers more special was how they could relate to the young volleyball player, Matt said. Santarelli had his own ACL injury and Bazzell knew Kaylee Schrock’s high school layout so she could quiz her on what stairs she took each day.

“She was a great patient who worked really hard in therapy. She had a positive attitude when it's very easy to become negative. She knew what her goals were and did what she could to achieve them,” Bazzell said.

Santarelli agreed with Bazzell and said Kaylee was such a joy to work with. “She had a great attitude when it came to therapy. She worked hard through all the phases, understood what we were trying to accomplish with therapy and even had the strength to gut through the tough times that allowed us to get her to a place where she could succeed.”

This year Kaylee is grateful to be co-captain of the volleyball team and even though she missed her sophomore and junior season, she hopes to play on a Division III college team. In addition to playing, she would like to study psychology and someday become a child psychologist.