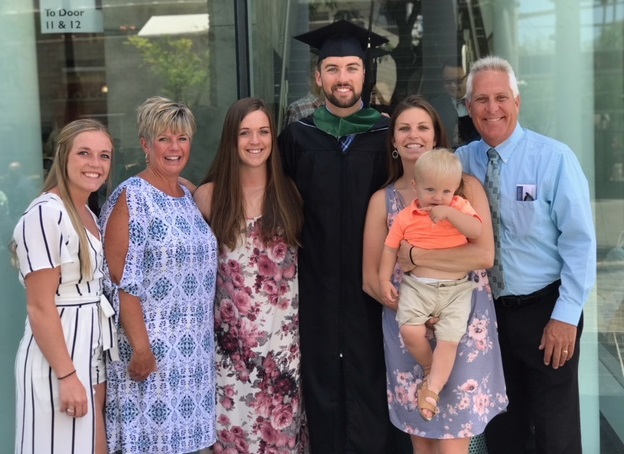 Kelly Hussey planned for this to be his last school year at Morris Community High School, where he’s worked for 38 years.

Hussey started the year just weeks after a major heart attack – and the quick response that will allow him to enjoy his retirement.

“A wakeup call and a shock, all in one” Hussey recalls of his experience. “I’ve told a million people that I’m a lucky man.”

But if luck is the residue of design, it’s Hussey’s good fortune the design for his survival and eventual return to health were firmly in place some 50 miles south at Carle Foundation Hospital in Urbana. The American College of Cardiology recognized recently Carle Heart and Vascular Institute with its Platinum Performance Achievement Award for “implementing a higher standard of care for heart attack patients.”

Hussey learned that June 14, four days after his 61st birthday.

He was visiting family in Charleston, when he and his brothers decided to play some tennis at Eastern Illinois University (EIU), where one brother worked.

Hussey felt the first symptoms in the locker room after their sets.

“I thought it was heat exhaustion,” Hussey said. “I thought I needed to cool down. It was about that time I started feeling classic symptoms – that chest pain extending to my shoulder.”

Hussey’s brother recognized the symptoms and called an ambulance. Hussey first went to Sarah Bush Lincoln Health Center in Mattoon. Staff there quickly decided to airlift him to Carle, about 50 miles north.

“I remember seeing clouds,” Hussey said. “I remember hearing the flight nurse in my headphones.”

Every year in the U.S., about 395,000 cases of cardiac arrest occur outside of the hospital in which less than 6 percent survive, according to the National Academy of Sciences.

Carle’s response is designed to improve those odds.

“We have a team that gets activated whenever this happens,” he said. “We’re ready when they come here. We have a well-coordinated system. These operations are very time-sensitive, so we’re very well prepared.”

“But in the lab I do remember getting shocked and somebody saying in my ear, ‘Your heart went into a bad rhythm, and we had to shock you,’” he said.

“It’s a very anxious situation for the patient,” he said. “Nobody’s ever prepared for a heart attack. You have to act really quickly, and we take a lot of care to keep the patient informed about what’s going on.” Hussey’s family arrived as he was leaving surgery, where Dr. Kanakadandi and the team installed stents to restore blood flow around severe blockages in both cardiac arteries. They visited him in the intensive-care unit where Carle’s staff made an impression.

“I felt like I was the most important thing in the world to the people who didn’t even know me,” he said. “Even the people who just brought the meals in. They were very careful telling me what they didn’t want me to do to affect the (recovery) process.”

Two days after his heart attack, Hussey went home. But his recovery continues. He’s working with a care team in Morris and “learned a ton” about limiting bread and sodium. He even installed an app on his phone to read barcodes and menus.

Hussey walks about 20 minutes a day. Always healthy and active, he plans to get back to running soon, and he’s played some tennis.

“I can’t control heredity, but I can control some of the life factors,” he said.

Preventing events like Hussey’s is key to the Heart and Vascular Institute’s design, Dr. Kanakadandi said.

“The best evidence we have is that even if you’re in good health you should go for your (yearly) routine physical assessment,” he said. “Addressing risk factors plays a big role in preventing heart attacks. There are those genetic and environmental factors, but for the majority, screening for these conditions and addressing them shows results in reducing the risk of heart attacks.”

“I’ve got one grandchild. I’ve got two daughters getting married during the next school year,” he said. “There’s lots of things in my future that I want to be around.”