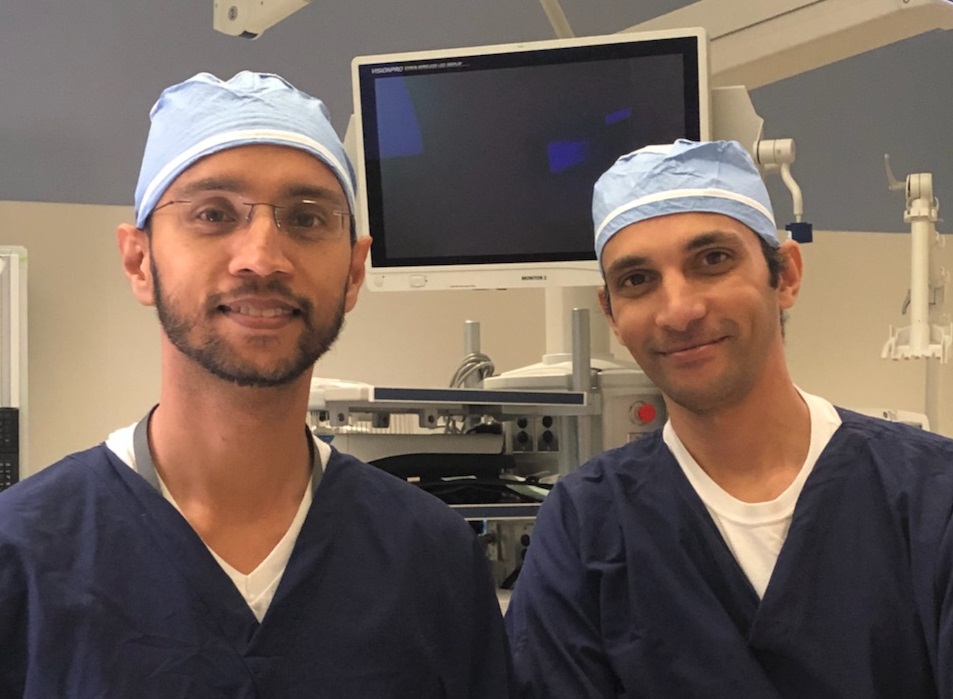 While Carle Neuroscience Institute continues building its team, tools and techniques to meet even more patients’ critical-care needs closer to home, the effort is already paying off.

“The guys at Carle, what a couple of fellows,” said brain aneurysm patient Donald Day of Clinton. “Those guys were great.”

“Those guys” are Wael Mostafa, MD (right), and Amrendra Miranpuri, MD (left), who headed the team that diagnosed and treated a condition this summer that made Day’s life miserable and threatened much worse. The doctors, both relatively new to Carle, collaborate to deal with patients’ complex neurological conditions.

Vascular neurosurgery treats diseases and conditions of the brain’s circulatory veins and arteries with therapy and minimally invasive procedures, as well as surgery when necessary. Less-invasive techniques employ a catheter containing medications or even miniature instruments inserted into a blood vessel.

Combining the subspecialties and innovative techniques with state-of-the art equipment allows doctors to treat complex neurological conditions, including brain tumors. Among the newer technologies at Carle are cortical stimulation mapping, which uses electrical stimulation to locate the function of specific brain regions, and fluorescent-guided tumor detection.

“We’ll give the patient the dye in the vein during surgery, and I have the microscope,” said Dr. Mostafa, Carle’s program lead for brain tumor treatment. “During the surgery, the tumor will glow, but the rest of the brain will not.”

Perhaps even more important than leading-edge tools is the collaborative approach to diagnosis and treatment.

“When we both look at patients who come in with complex vascular problems, we have a principle that it’s very important to sit down and look at the case together,” Dr. Miranpuri said.

Dr. Mostafa added, “We’ll tailor the options for each patient based on what’s the best for that patient. We have conversations to obtain a consensus the best next steps.”

Day, 74, knew something was wrong beginning in early summer.

“It was a chronic cough, and it would give me a pain in my head as I coughed,” he said. “I had gone to a couple other hospitals and doctors, and no one could tell me what it was.” CT scans at other facilities indicated the presence of a brain aneurysm, the weakening of an artery wall causing a bulge that can rupture and cause a stroke.

“I didn’t know I had an aneurysm,” Day said. “I knew I had something wrong with me that was making me cough and just feel terrible.”

Finally, a doctor in Day’s hometown decided the situation warranted an ambulance ride from Clinton to Carle, about 50 miles. Further investigation by Dr. Mostafa and Dr. Miranpuri revealed a large aneurysm compressing the brain stem.

“After discussion between myself and Dr. Miranpuri, we decided the best treatment for him was surgery,” Dr. Mostafa said.

That collaborative decision-making is vital.

“In the work that we do, it’s way too complicated to think one person’s going to know the best thing,” Dr. Miranpuri said. “Engaging each other, questioning each other, that leads to the best decision.”

Dr. Mostafa added, “The outcome is much better because of the promoting of intervention. If the patient needs surgery right away, we can do that.”

“I got all my family together, my children, and they kind of told me the options they could do,” Day said. “They explained everything, answered every question (the family) had.”

‘No pain or anything’ The August surgery was a success.

“I had no pain or anything,” Day said. “I was a little groggy, but nothing serious.”

Still, any procedure involving the brain calls for extensive recovery. In Day’s case that meant a four-week inpatient stay with extensive therapy.

“When it was time to leave, I could walk right out of there,” he said. “I didn’t have a problem – no pain.”

While Day’s procedure addressed the threat of a stroke, Carle Neuroscience advances also mean care teams are better equipped to treat stokes and seizures. Some cases would have required travel to Chicago, St. Louis or the Mayo Clinic just a year or two ago.

“We provide comprehensive stroke services here at Carle, involving every potential individual who would need to be involved, managing complete stroke treatment,” Dr. Miranpuri said. “From EMS to ICU to the neuro-interventional surgeon.”

“From the endovascular standpoint, this is really an emerging technology,” Dr. Miranpuri said. “A lot of the treatments we offer we never had the opportunity to offer patients 20 years ago.

“We are always working to be on the leading edge.”