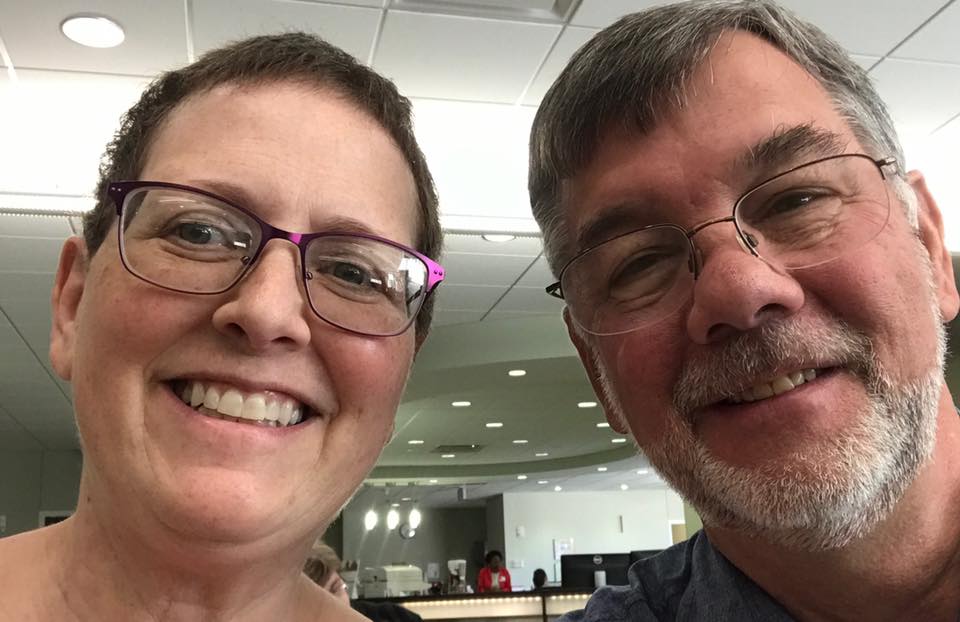 Robin Clarke is happy to be at her Urbana home again instead of living at Carle. She’s especially glad Mike stands firmly by her side as he did during her 92-day hospital stay and their 37 (and counting) years of marriage.

They still visit Carle regularly, often to joyful greetings from those who know Robin might not have survived had she not received the timely and comprehensive stroke care she did at Carle.

This spring, Robin, 58, suffered a subarachnoid hemorrhage from a ruptured aneurysm, a type of bleeding stroke. Carle’s recent Comprehensive Stroke Center designation meant Robin’s care teams stood ready to handle her complex case – from when she arrived through Inpatient Rehabilitation and beyond.

“To be successful,” Robin said, “I knew I had to have the right mindset while I recovered. I had to try. The encouragement from everyone along the way has meant the world.”

Carle Foundation Hospital gained certification from DNV GL Healthcare as its only Comprehensive Stroke Center in downstate Illinois. This designation reflects the highest level of competence for treating the full spectrum of stroke events, including the most severe and complex.

“Dr. Miranpuri was always thinking 10 steps ahead for whatever Robin might need,” said Mike, a retired computer programmer. “He kept saying if this happens, we’ll do this. The ‘if-then’ statements resonated with me, to say the least.” Mike and Robin are quick to point out every person they interacted with at Carle – from nurses to housekeepers to physical and occupational therapists – made Robin’s recovery possible.

Mike, who admits crying often for a host of reasons the last several months, most fondly recalls the communication and kindness of Intensive Care Unit night nurse Matt Phillips, RN. After about 40 days of being unconscious, Robin finally met one of her many heroes.

“He knelt down in front of her and introduced himself. He said, ‘I’m just so glad you’re OK,’” Mike said, adding, “He had me in tears.”

During Robin’s first 24 hours at Carle, her chance of survival was 5 percent. After the next 48, it crept up to 30 percent.

“You had to be there to see Robin and Mike’s level of resilience. For this and other kinds of complex care, we take the family’s input very seriously. We have the medical perspective, but family and friends know these patients,” Dr. Miranpuri said.

In Robin’s case, “Mike has seen her more than anyone else. He was our eyes and ears. He was instrumental in her recovery. He was always asking questions, holding her hand.” He was there when she walked again for the first time using a walker. Robin considers that her biggest triumph while in the hospital.

And the simple things today mean so much to the couple.

“Going home was such a big step,” Robin said. “I was able to do more things on my own. I could sleep in my own bed again and have more independence.”

The new designation is vital as the region’s hospitals send patients to Carle for levels of care they don’t provide.

“We owed pursuing Comprehensive Stroke Center status to ourselves and the communities we serve. This validates we are a bona fide stroke program with the right emphasis on safety measures and quality outcomes,” Dr. Miranpuri said, applauding Carle Arrow Ambulance, the emergency department, the Intensive Care Unit, Inpatient Rehabilitation and more.

“Together we provide the whole spectrum of care for mild to severe strokes. And we help ensure patients have the best quality of life possible.”

About a year ago, Robin and Mike worked together to remodel their kitchen. Her spirit today – as she anticipates another surgery to make sure all is well – is the same.