First Watchman patient at Carle refocuses on a healthier life 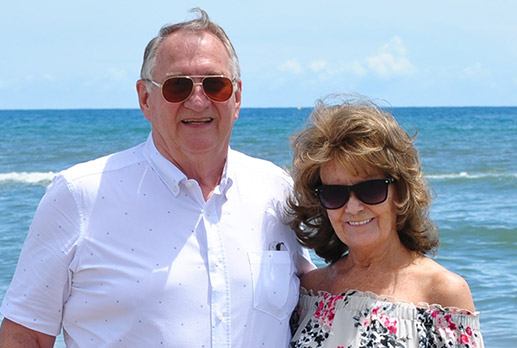 Ronald Eaker remembers more nurses than usual coming in and out of his hospital room as he prepped for a surgery to install the Watchman device in his heart.

Considering his history with heart issues – including three heart attacks – he knew what was normal for a heart procedure. This wasn’t it. Finally, he overheard one nurse say something about the patient being first. So he asked to confirm his thoughts.

“What the heck is going on?” Eaker wondered aloud.

It turns out he was Carle’s first Watchman patient. Eaker agreed to have this procedure after learning of its effectiveness in reducing the risk of stroke for patients with atrial fibrillation (AFib). It also offered an alternative to blood thinners. This meant eliminating issues like extensive bruising and internal hemorrhaging.
Still, he didn’t see the hoopla surrounding this procedure coming.

“To describe it as a parade wasn’t far off either. Staff and other folks lined the hall and cheered for me as my gurney went from prep to the operating room.”

Eaker’s own excitement for the procedure didn’t come from the cheering, though. It came from the potential to live a more healthy and confident life.

His three heart attacks led to the onset of AFib, or an irregular heartbeat. The condition can lead to blood clots, stroke, heart failure and other complications. Combine that with his wife’s health issues, and he had an overwhelming feeling something needed to change. 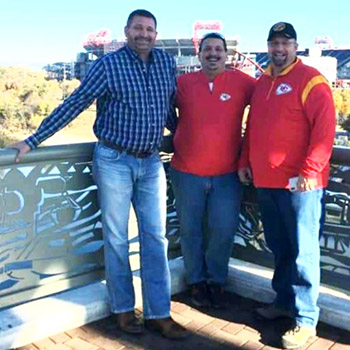 “My wife and I were each married before, and now we've been married for 25 years. Between us, we have seven kids and 17 grandkids,” Eaker said. “The idea of suddenly having a stroke was scary because I knew the burden of caring for me would fall to her.

“Everyone else is in the middle of living their own lives. I didn’t want to be a burden or hold any of them back.”

Despite overcoming some financial hardships, in part due to his health, Eaker believed in this procedure. Enter electrophysiologist Mbu Mongwa, MD, with Carle’s Heart and Vascular Institute since 2009.

Together with interventional cardiologist Issam Moussa, MD, MBA, the two introduced Watchman at Carle in 2018. That same year Dr. Moussa joined the organization.

For Dr. Mongwa, the success in this instance wasn’t about being the first. Instead, the first patient allowed him a moment to think about the bigger picture and connect this success to his purpose in medicine.

“You hear stories, like Ronald’s, in which they share their worries with you,” he said. “If you’re a concerned physician, it begins to rub you wrong if you continue to hear something but don’t have the right solution. In this instance, we were so happy to present the answer that contributes to the health of our local population.

“This is why I went into medicine.”

For a few years, Dr. Mongwa knew of Watchman's effectiveness in reducing stroke for AFib patients. It took Dr. Moussa's arrival at Carle, though, to fill out the care team needed. Now, Carle has completed this procedure for 20 patients.

On average, the Watchman operation takes about an hour “from skin-in to skin-out.” It only takes a couple of days to recover. Some pain can linger for a bit after the procedure. Then, six weeks later, patients typically can stop taking blood thinners.

“Other Carle doctors refer a lot of the Watchman patients to us, because AFib is the most common heart arrhythmia. It affects between 3 to 6 million American adults,” Dr. Mongwa said. “At Carle we have a complete team assessing your needs and conducting this procedure. Michele Priest is an amazing nurse who coordinates patient care with nurse practitioner Bryce Yantis.”

From an emphasis on patient education before the procedure to in-procedure execution, the care team includes:

“I had total confidence in the Carle staff that cared for me,” Eaker said. “Now, I have a peace of mind that stroke or other bad scenarios might not happen to me as soon as I thought they could. My wife and I have gone back to enjoying our house in Champaign, where I love to garden. My other interest is photography.

“It’s not sports and golf like it used to be, but we have a lot to be happy about.”

Carle Hospitals lead in clinical excellence in 2023 from Healthgrades®