Helping the best get better 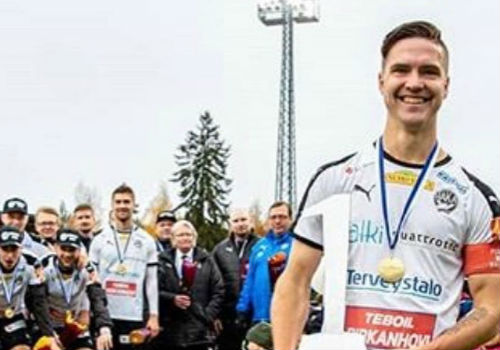 Growing up in Champaign and starring at Centennial High School, Jacob Bushue said he was born into a full-fledged soccer family.

His older brother, Cole, went on from Centennial to play at Millikin University. His older sister, Megan, scored more than 100 goals at Centennial and is already in the school’s athletic hall of fame. After “trashing” their younger brother in the backyard growing up, they inadvertently pushed Jacob to achieving something more in the sport.

“Being the youngest one, I always looked up to them, but there was something more to that experience,” Bushue said. “I not only wanted to be as good as them, I wanted to do something they hadn’t done. Growing up, I wanted to be better than them.” 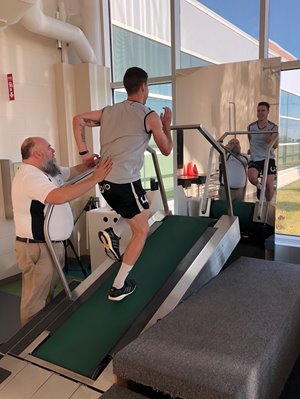 On the precipice of his most exciting professional season yet, two thoughts brought Bushue back home from Finland this fall. First, he wanted to spend time with family and give back to the community he grew up in. Second, he wanted to train with Carle Sports Medicine in preparation for his highest level of competition so far.

“I did the training program at Carle Sports Medicine in high school. The trainers listened to me, and I saw a big benefit from it,” Bushue said. “This time around it’s been the same, exact thing. Every offseason I’m thinking about improving a certain set of skills. Right now, I need to get stronger. I’m moving up a level this year, so I need to get better.”

Bushue will be moving up to the first division as a member of the Finnish soccer club FC Haka. With the step up, he wanted to find a different gear – an explosion in the first few yards to gain separation from a defender.

That meant Carle athletic trainer Kevin Harbour had a unique challenge on his hands.

“We definitely try to tailor most of our programs to some degree based on who’s coming in,” Harbour said. “So when I first found out that Jacob was looking to come back for training, it was really a bit of a wow moment.

“We knew we better do our homework, because we wanted to make sure we met his really high standard.”

After an introductory interview, the athletic trainer convened with colleagues to begin setting up a plan. 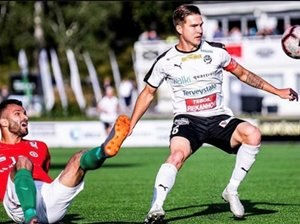 The trick wasn’t just to produce a program that would push any athlete; it would have to push a professional athlete already in peak physical condition.

And Carle Sports Medicine proved up to the challenge.

They implemented a Monday, Wednesday, Friday schedule that focused on two methodologies.

First, they set up a treadmill program. Running on an incline in short bursts meant Harbour wanted Bushue to feel like he was running up a hill without being able to slow down.

Second, the ground routine included exercise that would boost core strength specific to soccer. Think about a soccer player having to hold his or her ground with the ball at their feet, while another person uses external force or pressure to separate that player from the ball.

To recreate this, Bushue conducted footwork pattern drills, while handling the soccer ball and having 10- to 15-pound medicine balls thrown at him from different directions. Additionally, they used Athletic Republic Resistance Cord Programs to also duplicate this issue.

When the five-week training program concluded, Bushue saw the changes he wanted.

He increased his standing long jump by 5 inches. His vertical jump increased an inch and a half. His leg press – done with just one leg, because he could press the entire weight stack with both – went up 45 pounds in one leg and 60 pounds on the other.

“What we hope to achieve at Carle Sports Medicine is to have someone turn to us with a direct thought about how they can improve, and then help deliver that change,” Harbour said. “It’s really cool to have someone like Jacob come in and trust us to help him through this remarkable journey he’s undertaking right now.

“This is making a change in somebody’s life who now trusts us to help them.”

Later this week, Bushue will take the pitch for his first exhibition as a first division player in his Finnish soccer league. It’s a moment he’s been building to for years. Carle Sports Medicine helped him achieve his goals and continue to do so.

“By the time I was 10 years old, I knew that this was the only thing I really wanted to do,” Bushue said. “Through all these years, this wasn’t crazy to me. I thought I was going to do this. My goals were crystal clear in my mind at a young age.

“This is what I’m supposed to be doing.”