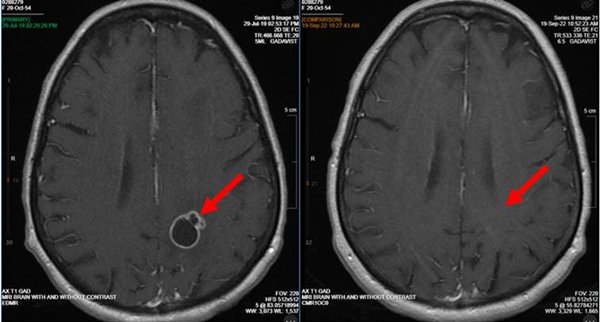 Brenda Schmink raised four children alone while working full time building windows and doors for a living. While that presented its own set of challenges, she is overcoming personal challenges again at Carle Cancer Institute as a patient treated for three brain metastases and brain swelling from her state IV lung cancer.

Looking back, the grandmother of four said she kept losing weight, had memory issues and wanted to sleep most of the time. “I was going to do dishes and the next thing I know, I was in Carle Hoopeston Regional Health Center,” she said. “They told me in three days exactly what was going on.” 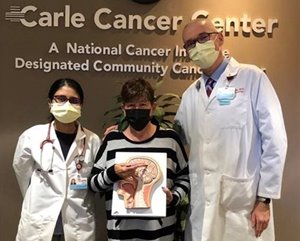 At Carle Cancer Institute, they used the most advanced technology for pinpoint (stereotactic) radiation therapy to her brain with only five radiation therapies utilizing the most sophisticated beam shaper that avoids normal brain tissue and delivers radiation to the cancer tissue only.

She also received systemic therapy (infusions) by Pratima Chalasani, MD, Carle Medical Oncology and this included a new form of targeted therapy – immunotherapy that enhances the ability of her immune system to fight cancer. Now, more than three years since her cancer diagnosis, Brenda is without evidence of cancer recurrence, doing well, and spending time with her family.

“You listen to what they tell you and you have the faith to fight it,” Schmink said. “If it wasn’t for my two doctors and my kids and grandkids, I wouldn’t be here.” She added many thanks for church family members like Buck and Carrie Stimson who are there to help her family through the challenges of the illness.

Chalasani said Schmink was an excellent candidate for the treatment. “She was motivated to do this for her family.”

Research collaboration provides insight into use of 7 Tesla MRI