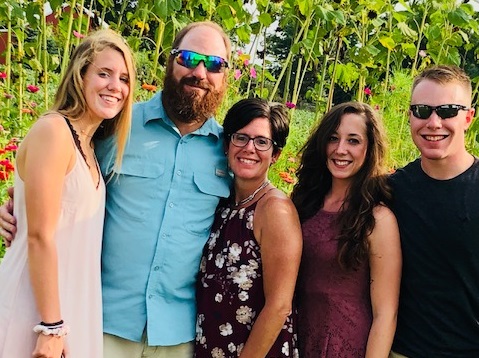 Kim Henning had suffered from the effects of colitis since she was 18. At 36, she found herself on a near-continual dose of steroids just to keep the disease at bay.

She decided to take action and have surgery to address the problem. Though her road hasn’t been without challenges and it certainly hasn’t been easy, Henning decided to use her years of ups and downs to help others as the chairperson of the Carle Digestive Health Institute patient advisory board.

“When you have a broken bone, that’s something everyone can see, but when you have an autoimmune disease, often you don’t want to talk about it because it can be embarrassing,” Henning said. “When you aren’t feeling well, people don’t understand why you aren’t feeling well. I hid it as much as possible and let as few people know even when I was so sick, I shouldn’t have been at work.”

Because so many people suffer from diseases such as Crohn’s and colitis, Carle continually adopts new treatment options to handle the physical parts of these intestinal diseases and created the patient advisory group and support groupa to help fill in the emotional and social parts.

“For our patients, we bring cutting-edge treatment studies to Carle,” Dr. Simon Crass said. “This has allowed for access to the newest and most innovative treatment options for GI (gastrointestinal) patients in the region.”

In 2010, when Henning had surgery to remove her colon, she said although her physicians and their teams were wonderful, having someone to talk to about things like dealing with an ileostomy bag would have been a game-changer.

“Back then, they didn’t have what they have now at Carle,” she said. “Since then, they have come up with support groups where you can talk to another person who has the same issues you have about going out to eat, vacations, intimacy.

Henning jumped at the chance to be involved in the patient advisory board to help alleviate some of others’ stress by just providing a safe place to talk about uncomfortable things. “The person who is reluctant to speak to anybody about their digestive problems or the person who feels alone because they don’t know anybody else going through what they are going through, those are the people we want to see,” she said.

“We can help you through this.”

If Henning could go back and talk to herself before her surgery, she would tell herself not to go it alone.

“Nobody knows why this group exists until they go through something like this,” she said. “We understand it’s an extremely private, personal issue they are going through. All we want to do is help. It’s vital to have somebody there for you, and Carle is doing such a great job at making that happen.”