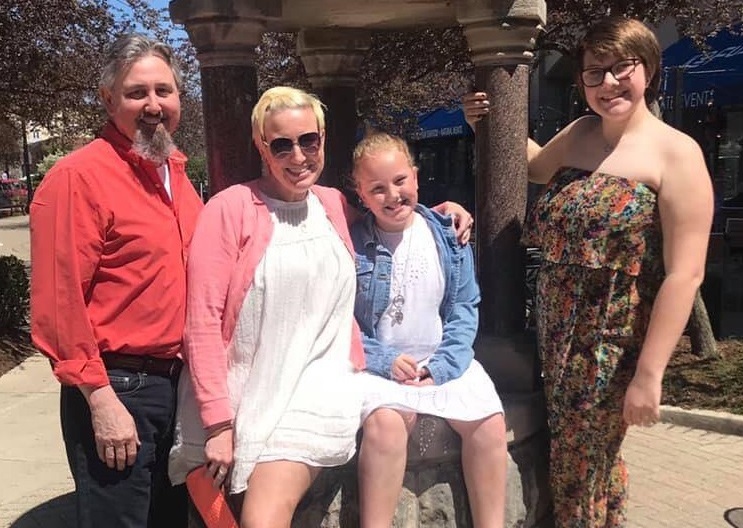 Heidi Hewkin and her girls – Maya, 13, and Maggie, 10 – strive to eat how most of us should – lean protein, plenty of fruits and vegetables, easy on the empty carbohydrates. That doesn’t mean they don’t get creative in the kitchen. Think cauliflower pizza crust, smoked salmon benedict and bulgogi turkey sliders.

“It’s important that they know how to cook and how to manage their choices about the food they put in their bodies,” said Hewkin of St. Joseph, who had gastric sleeve surgery at Carle about five years ago, so must focus – and refocus, when necessary – on healthful eating. “I know what I need to do to stick to it, to be where I want to be.”

Also called laparoscopic sleeve gastrectomy, the procedure greatly reduces the size of a person’s stomach so he or she feels full after eating small amounts of food.

“I decided I just needed to do it,” Hewkin said, who weighed just shy of 300 pounds at the time. “I really couldn’t do much. It was hard for me to breathe. I wanted to set a good example for Maya and Maggie.”

Carle Bariatric Surgery and General Surgery patients now receive pre- and post-procedure care at Carle Outpatient Services at the new medical campus in southwest Champaign. Between Windsor Road and Curtis Road near Interstate 57, Carle Outpatient Services is on the same side of Fields South Drive as Stephens Family YMCA. It's the southernmost medical building of the three there, with Champaign Surgery Center and Christie Clinic at The Fields just to the north. Years after her procedure, Hewkin calls the required pre- and post- changes “intense.”

She couldn’t have carbonated drinks and ate mostly protein-rich broth and sugar-free popsicles. After surgery, she walked regularly to help her heal and to establish an exercise routine.

As she acclimated, Hewkin moved from liquids to soft foods to real food about eight weeks after surgery. It took her about 20 minutes to eat a meal. Eating too much or eating too quickly produced clear reminders her stomach could only handle so much.

“It was amazing. The weight just fell off,” she said.

Hewkin lost about 150 pounds in a year and a half, stressing bariatric surgery is a tool for being healthier, not a magic fix-all.

Hewkin’s surgeon insists patients are not alone as they develop fitness routines and place healthy eating top of mind.

“Bariatric surgery is a commitment to a new way of living,” said Blair Rowitz, MD. “Before surgery, we work with people to help them make the kinds of changes that will produce long-lasting success, not just for their weight, but how they’ll feel, what they’re able to do and how healthy their lives will be.”

Support from family, friends and Carle medical and nutrition staff worked for Hewkin. As does continuing support and kitchen camaraderie from boyfriend Bill Slough. “I had to create a different lifestyle and get my mind right,” she said. “It’s eye-opening when people wrap their arms all the way around you with support.”

She knows little changes make a difference, like having the right kind of food nearby. The Hewkins eat at home often and choose fruits and vegetables as snacks. Despite their penchant for sushi and poke, the problem with having junk food in the house is clear.

What does Hewkin say to others considering bariatric surgery?

“I would do it again in a heartbeat,” she said. “This saved my life in more ways than one.”

Carle is communicating about the moves to patients and their families in a number ways, including letters, appointment cards and reminders by phone.