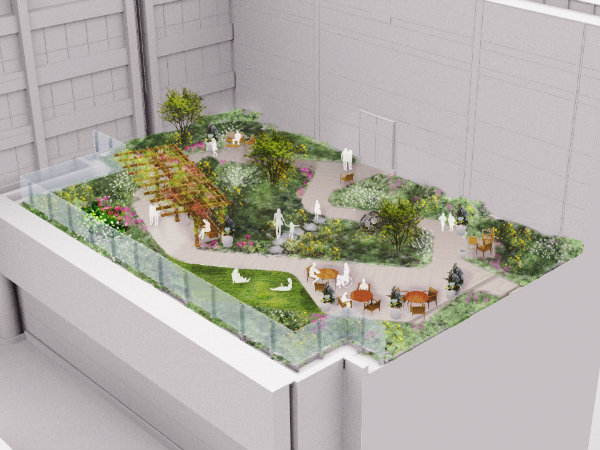 Despite severe weather warnings just hours before, Mother Nature smiled August 20 as Carle staff joined the family of Will Tate, the young boy who inspired the creation of a rooftop garden at Carle, at the future site of Will’s Garden. Luckily, the only water being poured came from watering cans as the first seeds of the garden were sown to commemorate the start of construction.

“It’s a very exciting day,” James C. Leonard, MD, president and CEO, The Carle Foundation, said. “Will’s Garden is one of the most unique features ever to be built at Carle Foundation Hospital.”

In a few short months, the rooftop between the sixth floors of the North Tower and Parkview building will transform into a 6,000-square-foot tranquil oasis for patients, patient families and staff.

“We’re also here to remember Will and his brave battle with cancer that really inspired this garden,” Dr. Leonard said. “He was so young, and yet he was thinking about other people and what this garden could be for others who come along. It’s very special. And with that leadership from Will, this garden is really going to make an impact here at Carle in many ways.”

Joining Dr. Leonard for the celebration were Will’s parents, John and Melissa Tate, as well as his brother Ben and sister Sara. Rather than the traditional turning of dirt, each watered some of the first plants you’ll find in Will’s Garden when it opens next spring.

“If somebody would have told us 13 years ago that we would be up here getting ready to open a rooftop garden at Carle, I would have told them they were crazy,” Melissa said. 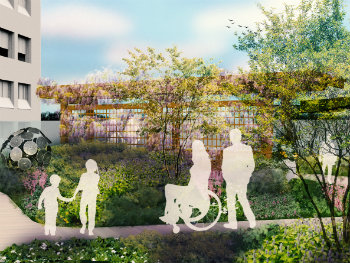 Will’s Garden will give patients, families and staff a place to get away from the technology and the intensity of the hospital setting. Will’s Garden will allow visitors to take a moment and breathe. It will also serve as a reminder that health isn’t just medications and fancy equipment.

“It’s also about appreciating nature and the special time we’re given in life,” Dr. Leonard said. “What a tremendous gift to us here at Carle to have these things wrapped up in this garden.”

Melissa remembered Will as an athletic, smart, quick-witted and funny 13-year-old.

“A lot of people ask me what Will would think of this, and I think he would have just been overwhelmed by the whole thing, overwhelmed with how generous and supportive Carle and the staff have been,” she said.

Beth Katsinas, vice president of Carle Health Center for Philanthropy, confirmed the outpouring of generosity for this project has gone beyond expectations.

“First, we had thousands of staff and physicians from Carle and Health Alliance step up and say they want to be a part of this,” Katsinas said. “Before we knew it, we were half way to our $1 million goal.” 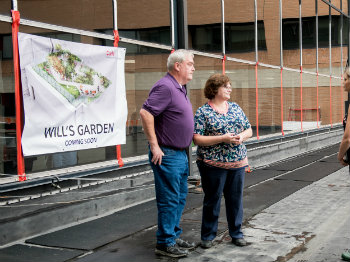 Then, hundreds of corporate partners stepped forward as sponsors of the 2019 Carle Golf Open. The beneficiary of this year’s event is Will’s Garden.

There’s still time to make a donation to support the garden. Visit carle.org/give or text “WillsGarden” to 7177.

“We’ve also had people from throughout the community come forward and say they want to be a part of it,” Katsinas said. “It’s such a meaningful and special project, and it’s right here in the heart of our hospital.”