Cardiac rehab in Mattoon turns a fortune and builds a friendship 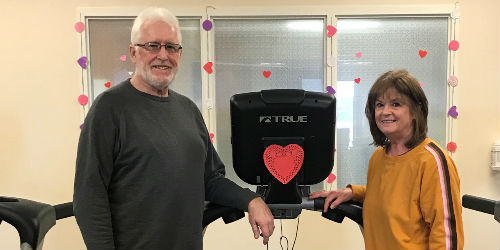 Prior to May of last year, Vickie Gilbert didn’t think much of the shortness of breath or occasional rapid heartbeat she felt.

Then she found out, from an electrocardiogram (EKG) and echocardiogram, that her heart was functioning at just 5-10 percent of its capacity. Stunned, Gilbert began thinking the worst thoughts about how long she still had left to live. As a wife with three sons and 11 grandchildren, this thought not only horrified her but also her family.

“The news hit me like a lead balloon, because up until that point I thought I was perfectly healthy,” said Gilbert, a native of Westfield – near Mattoon. “I felt fine, not even tired. In fact, I’m a high-energy type of person. But after the EKG, which I flunked, and the echocardiogram that I drastically flunked, I had to face a new reality.

That team included cardiologist Karen Wiarda, DO, nurse practitioner Kara Painton and outpatient rehabilitation therapists at Carle Mattoon on Lerna. This group immediately began her on a medication plan, supported by consistent exercise.

If Gilbert had doubts, her medical team did not.

Almost immediately, things began to change as the patient adhered to the plan. Stephanie King, a Carle employee for nearly 20 years, was one of her rehabilitation therapists. 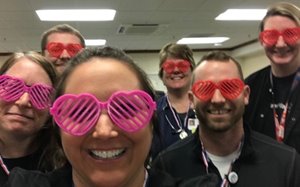 “Our job is to grasp a patient’s diagnosis and explain what they have to do next,” King said. “Vickie was dealing with mitral regurgitation, which is basically a backflow of blood. This resulted in a severely impacted ejection fraction, which means that the heart isn’t pumping enough blood for the body.

“We focused as intensely as we could on matters she could control. She got the salt off her dinner table, she stuck with her medication regiment and she exercised with us consistently.”

It helped that she only had to drive 20 minutes from her house to this Carle location in Mattoon. Gilbert said the convenience and the experience helped her.

Quickly, the three sessions per week turned into something beyond exercise.

Gilbert confided in the group about her feelings. She reveled in her successes with them. She brought in her husband, Steve, who met everyone helping his wife’s heart health.

“From the very beginning, I never felt like just another number or another patient with this group of people,” Gilbert said. “They were passionate about answering my questions, and I had some pretty crazy questions. I thought I was doomed here; I felt like this was it for me.

“They encouraged me, and I soon felt like I was doing all I could do. I realized during that time, these people had all become my friends.”

Almost as quickly as that transition, her heart began to bounce back and pump blood like it should.

A normal ejection fraction hovers around 50-70 percent, and, remember, in May Gilbert’s was under 10 percent. Just three months later, following the doctor’s plan along with the assistance of her rehabilitation plan, her ejection fraction registered between 25-30 percent.

Two months after that, and five months since her diagnosis threw Gilbert into uncertainty, the ejection fraction increased to a normal percentage.

“I’m most impressed by her drive; Vickie is a very inspiring woman,” King said. “I’m amazed by her and so happy for her transition. I measure success in my work through the capabilities of our patients. When Vickie started with us, she wasn’t comfortable driving a car.

“Cardiac rehab is about providing a community for our patients. They know they’re not alone in this, and I love providing comfort for them.”

As for what’s next, Gilbert’s thrilled to continue her progression at Carle.

“I’ll tell you what this means to me; it means that I don’t want to quit,” she said. “I’m ready to go on to the next phase of this regimen, not only for the exercise but for their encouragement and their friendship.”

The same great care from the comfort and convenience of home