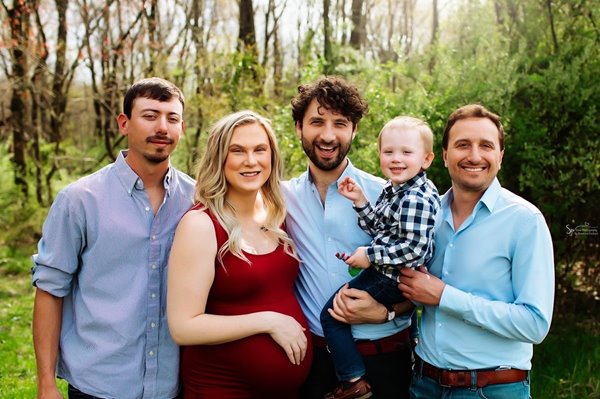 For most people, a dream trip would be to leave the Midwest and travel to Paris, France to see the sights. For one couple, their dream trip was just the opposite.

Maxime Dumont and Raphael Saier who are from Paris, France, spent several weeks in Olney, Illinois with Megan Rule and her family. Megan was giving them the ultimate gift and serving as a surrogate to grow their family. She gave birth to Maxime and Raphael’s daughter, Heloise, at the beginning of May at Carle Richland Memorial Hospital.

Their journey began in early 2021 when Rule decided to take an online quiz to see how well surrogacy would fit in with her lifestyle. Almost immediately after the quiz was complete, she got a text asking for a time to set up a phone call.

“I talked with the organization and after that phone call, it was pretty well a done deal. I was matched with an agency rather quickly and then with a couple,” said Rule.

Enter Saier and Dumont. They were interested in having a child of their own, but surrogacy is not permitted in France. So they decided to work with an agency out of California in the United States. The same agency Rule matched with.

Everything moved along at a rapid pace from there. They all hit it off from the very first video chat. Rule remembers the agency telling her to take a few days to think about it, but she knew right away that she wanted to be their surrogate. Dumont and Saier felt the same way.

“Usually it will take over a year from the time you match to implantation, but due to me being from a small rural area and doctoring at a smaller local hospital, things like medical records could be obtained within hours instead of weeks and it really helped the process move smoothly,” said Rule.

And so their journey together began.

After implantation (using an ovocyte donor) and during the first few months of pregnancy, they communicated mostly by phone and social media, getting regular updates about how the pregnancy was progressing. In December of 2021, at 24-weeks pregnant, the future parents were able to come to the US for a visit. At that time, they got photos together, including Rule’s husband and son, and were able to attend a prenatal appointment.

After traveling back to the US again a couple of weeks before Heloise was born, they waited for her arrival.
“We knew from the word go we were having a girl,” Dumont said. 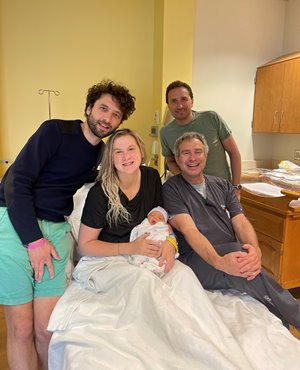 Finally, at four days overdue, it was time for Rule to be induced and the couple to become parents.

“When I started this journey, I knew without a doubt I would come here to (Carle) Richland Memorial Hospital to deliver her. Dr. (William) Padgett is my OB/GYN, I had 100% trust in him, I was comfortable with the staff here and knew this was where I would have Heloise,” said Rule.

Heloise Dumont-Saier was born on May 9 to Rapheal and Maxime, courtesy of Megan. To say they are pleased with their experience before, during and after Heloise’s birth here at Carle Richland is an understatement.

“We were so very supported and felt very safe with the staff here. They spent a lot of time with us, helping day or night if we had any questions. And they weren’t just being polite, we could tell they genuinely cared about us and Heloise and wanted to make sure we were comfortable and well cared for,” Dumont said.

“We couldn’t have asked for a better experience. Especially with the items we needed to obtain quickly, such as Heloise’s birth certificate and everything she needs so that we are able to travel back home with her to Paris. Stephanie (Ochs) and staff were wonderful. Being so far away from our friends and family during this time, it was the best possible scenario for us and we will always be grateful to them for making this a wonderful experience for us.”

The new family of three stayed in Olney for a few weeks after Heloise was born, returning to Paris over Memorial Day weekend. During the time they were here, they continued to see Rule and her family almost daily and also stopped into Carle Richland to see the staff and bring Heloise for a visit. Rule, Dumont and Saier will continue to be in close communication moving forward.

“We aren’t friends, we are family. It has felt that way for all of us since before she was even born. They treat my son like he is one of theirs, there is nothing forced about our relationship, which is why I knew from the start that I wanted to do this for them,” Rule said. “Surrogacy isn’t giving a baby away, it’s gaining new members of your family.”

“We would be happy to come to this hospital again if we were to do this again in the future. I am very proud to tell Heloise when she grows up that she was born in Olney, Illinois. She is a very lucky girl,” said Saier.
Learn more about Women’s Services in your area on Carle.org.