Like many little girls, when Nora McClain of Olney found out she was getting a new sibling, she wanted a sister. When new brother, Alex, arrived at 40 weeks and one day, Nora adored him. But she admired another that day, too – the flight nurse who cared for little Alex.

Lauren McClain’s pregnancies were easy, welcoming both Nora, 7, and Grant, 3. But early in her labor with Alex, the birthing team rushed her to the operating room to prep for an emergency C-section. Before that started, doctors gave her one last instruction: push now.

Out came Alex, and he wasn’t breathing well. His mom knew the moment she saw him that something was different about this sweet boy, and Rob and Lauren received confirmation later that Alex has Down syndrome. The worried parents realized just how serious the situation was when a helicopter came to transport Alex from Carle Richland Memorial Hospital in Olney to Carle’s Level III NICU a few hours away in Urbana.

That’s when the family met Nikki Grohler, a Carle Neonatal Intensive Care (NICU) flight nurse, part of Alex’s transport team. Every interaction from then on reassured the McClain’s that Alex was in good hands. 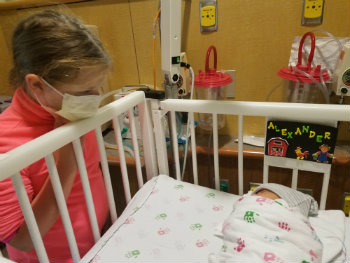 Grohler made an impression on the whole family but especially big sister Nora, who recently dressed the part of an AirLife flight nurse for “hero” day for first grade at St. Joseph Catholic School. She now wants to be a NICU flight nurse when she grows up because Grohler kept her baby brother alive.

She is often spoken of in the McClain household and they can’t wait to bring Alex to meet her.

“She knew her stuff and made Alex her number one priority,” Lauren said. “That day was just another day in the job for Nikki, but to us it was her most important day at work.”

Grohler connected Rob and Lauren with Alex’s care team before the helicopter took off with their son.

Rob said, “Hearing the doctor’s voice alleviated some of our anxiety. We received text messages the whole time they were in route. It was really nice to know how he was doing and where they were and when they landed.”

The McClain family felt like everyone they came in contact with were “friends we had never met before.”

“Alex’s nurse, Leslie, always came in the room and greeted (Alex) first with a ‘Hello, sir’ because he was her main priority. He’s our very own ‘Alexander the Great,’” Lauren said.

Thanks to the generosity of Carle Health Center for Philanthropy donors, families facing extended stays like the McClains can stay at the Carle Auxiliary Guest House. Complete with private and family bedrooms and a fully stocked kitchen, the Guest House kept Rob and Lauren steps away from Alex rather than miles and hours. To help, please visit carle.org/giving.

“We were greeted by name when we walked in the very first time,” Lauren said.

Coordinated compassionate care from start to finish confirmed Carle was the right choice for them.

“It didn’t matter where we were at – Richland, Urbana or the Guest House – everyone made us feel like family,” Rob said.

And their family continues to grow with Alex approaching four months. As the third child, he’s smothered by his older siblings and warming hearts with his smile.