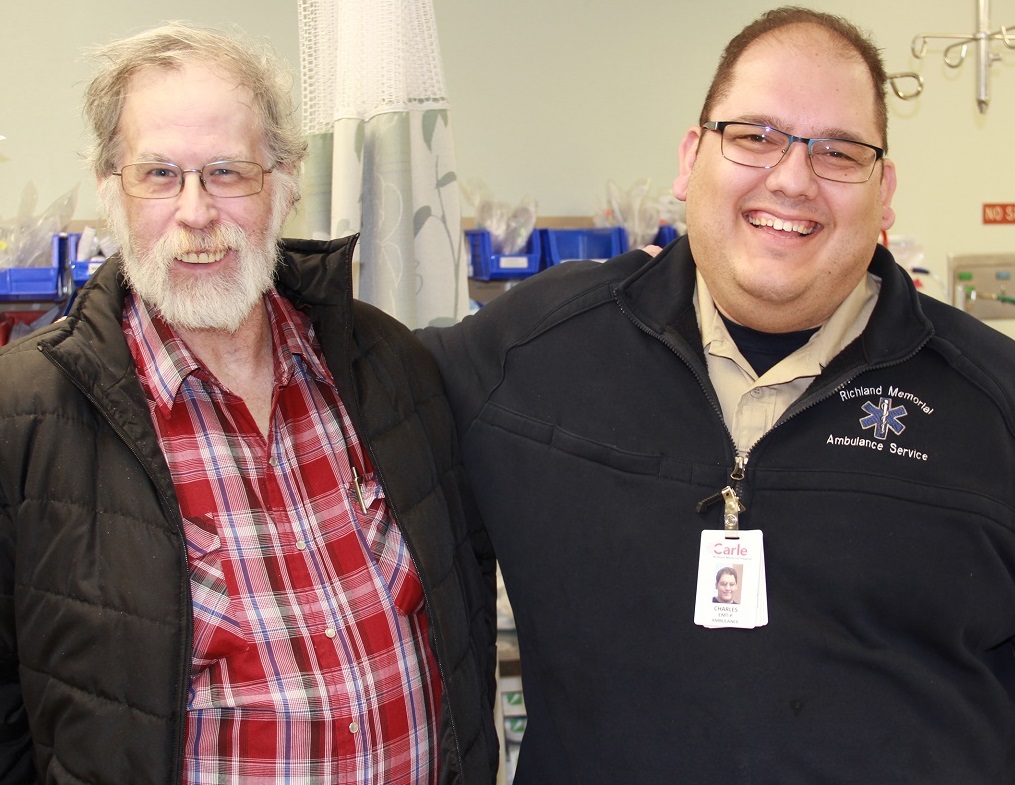 When Grant Brewer didn’t believe he was having a heart attack, Charles Yonaka was pushy in all the right ways.

“When we arrived, he was pale, disoriented and not answering questions well,” EMT Yonaka said. “Initially he didn’t want to come back to the hospital. Mr. Brewer said he had had trouble before and doctors hadn’t found anything.

“I called in his information to the emergency department, and the helicopter was maybe five minutes behind us. We brought him in, the doctor assessed him, the helicopter showed up, and off he went.”

Brewer’s experience spotlights one of the many benefits of Carle Richland Memorial Hospital and Carle Foundation Hospital in Urbana partnering with one another and with first responders to care for patients with emergency heart-care needs. The faster patients receive high-quality care, the less negative impact a heart attack has on the heart muscle.

“I always wanted to take a chopper ride. I just would have liked to have seen the scenery,” Brewer said.

Brewer’s heart attack symptoms didn’t look like those we typically see on TV shows and movies. That day, he got hot suddenly, didn’t feel right, grabbed the table and next remembers waking up on the floor.

Once in the ambulance, a 12-lead EKG confirmed Brewer was having a heart attack. The Noble area man, though, needed proof, much to Yonaka’s surprise.

“He made me show him the printout. I did and explained to him what it showed. I have never had a patient ask that before,” the EMT said.

Brewer does remember arriving at the Urbana hospital.

“When I got to Carle there, they took me straight to the cath lab. Each person had their own special job. They put a stent in an artery that was 70 percent blocked. We found out another artery is 40 percent blocked, and they recommended medication and diet change,” Brewer said.

“I really have to brag on my care team. You can tell they do this day in and day out.”

As positive as the experience was, Brewer plans to follow orders from Carle Richland Heart and Vascular Institute cardiologist Raymond Fisher, MD, so that if he heads north to Carle in Urbana again, it will be on his own terms.

“Hopefully I won’t have to make another trip up there like that,” he said, listing a number of people and care teams that helped in Olney and Urbana.

Brewer is eager to continue with cardiac rehabilitation in Olney so he continues to regain strength.

“Usually in my job as an EMT, I bring them in to the ER, and I don’t ever really know what happens to the patient from there. He was a good patient, had a good sense of humor. It was nice the see the end result,” Yonaka said.

“If the EMT hadn’t pretty much insisted they take me to the hospital, my family would have had to plan my funeral,” he said.

While he’s new to Olney, Dr. Fisher has been a cardiologist for more than 38 years and offers prevention, diagnosis and ongoing care for patients, including Brewer. For heart care, please speak with your primary care provider or call (618) 392-1139.