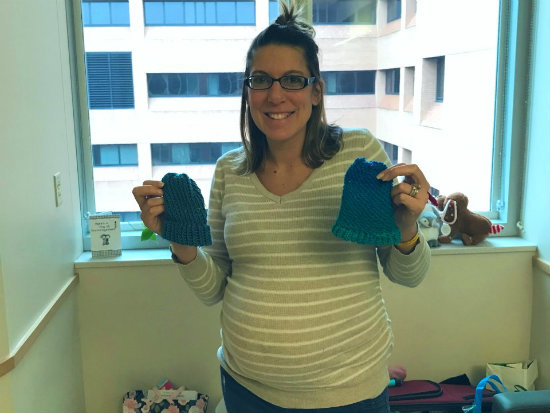 In October of last year, Tiffany Huisinga, a Title 1 teacher at Marshall North Elementary School, learned she had placenta accreta and previa with her third pregnancy. A month later, her water broke and she was at Carle Foundation Hospital until her delivery in February.

With placenta accreta, Huisinga’s risk of hemorrhaging was extremely high, and after her scheduled C-section, she’ll had a full hysterectomy.

“We’re nervous, but we have strong faith, and Carle is a specialty hospital for this,” Huisinga said. “They do it for those in the region who need it.

Her original due date was April 2, but things changed and they welcomed baby boy Logan late last week.

“This is our surprise baby. We already have a 13-year-old and an 8-year-old,” she said.

Huisinga did In Vitro Fertilization (IVF) treatments to help her become pregnant before, so being with child wasn’t on her mind when she and some family members got sick over the summer.

“Everyone else was getting better, and I wasn’t. I called my doctor’s office, and they asked me if I thought I could be pregnant,” Huisinga said.

From finding out she was pregnant to arriving at Carle, Huisinga found herself with a lot of downtime, so she needed to find ways to keep herself busy.

“I went on Pinterest to see what I could do. We didn’t have a Netflix account or anything, so I decided to learn how to knit,” Huisinga said. “My husband went to Walmart and picked up a knitting loom set. I Googled how to knit and started making hats.”

Before now, Huisinga had never knitted or sewed, but she’s gone through three full skeins of yarn and picked up cross- stitching. She’s also given away her creations with help from antepartum (the period before childbirth) nurses.

“It’s heartwarming to see a mom who has been in the hospital for so long, yet goes out of her way to create something meaningful for other moms who are in a similar situation,” said Mallorie Allen, RN supervisor, Labor & Delivery. “It’s not something we see often.” 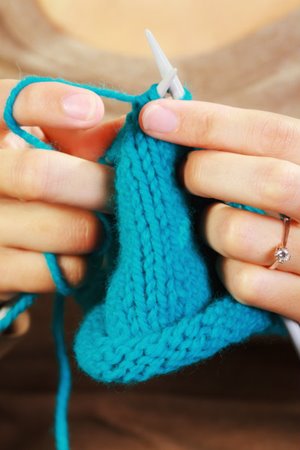 At one point, the nurses even pitched in and gave Huisinga more yarn.

“I ran out of girl-colored yarn, so some of the nurses started dropping some off for me,” Huisinga said. “I’ve been able to teach some of the other moms how to make hats as well.”

But besides making hats, she’s found other ways to occupy her time.

“When I first arrived, I was finishing up grad school, so I had papers to write,” Huisinga said. “After that, I contacted all my teacher friends in the area and was like, ‘Send me your grading and projects.’”

Thanks to Huisinga’s superintendent and coworkers, who donated sick days to her, she’s been able to focus on taking care of herself and the baby.

“Tiffany has been so positive during her pregnancy, despite her circumstances, and has come so far,” Allen said. “She is such a joy to be around. I think she’s the kind of person who wants to give back to others simply because she enjoys doing it.

“She was able to meet one of the moms who received one of her hats and got the biggest hug. The mom thanked her and said that it was the sweetest thing anyone has ever done for her."