Carle nurses among the brightest, most compassionate 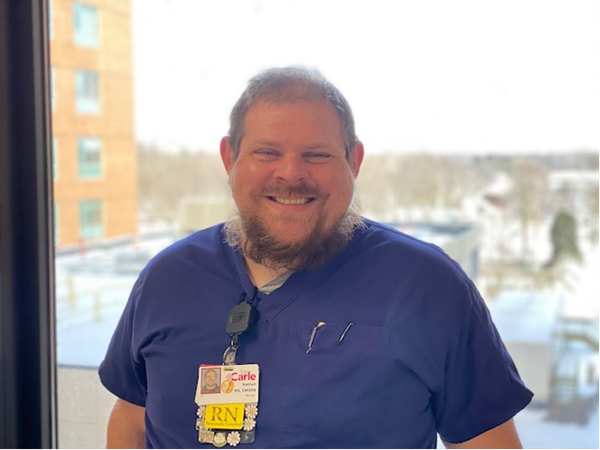 Nathan Welsh, RN, is on the medical surgery floor whose job is to care for patients who return from surgery. Like many nurses, he sees patients at their weakest and most vulnerable physical condition.

Through compassion, training and observation, he is there to work with a team of medical professionals to help patients recuperate and he could not be more proud of his nursing colleagues or the opportunities available to him at Carle.

“From the moment they hire you, they are setting you up for success,” he said. On the job for seven years, he now helps train some of the new nurses. “These folks are bright, insightful and personable. They just need that experience.”

He looks at the ability to help younger nurses as paying it forward from the help he received from individuals at Carle who stopped their work to help him. “They work hard, they work together and the outcomes are much better when we work as a team,” he said. “The people you work with are as important as the job you do.”

Superior nursing care is at the heart of the Magnet® designation proudly held by Carle Foundation Hospital and Carle Physician Group. Granted by the American Nurses Credentialing Center (ANCC), the national recognition first achieved in 2009 and most recently in 2019 for nursing excellence held by just 8% of the hospitals in the United States.

Elizabeth Angelo, DNP, RN-BC, chief nursing officer and senior vice president said Welsh is an example of the quality found in the nursing staff. “Carle nurses demonstrate both skill and compassion every day. Our nursing team members pride themselves on providing compassionate, individualized care. We know it’s a privilege to care for patients when they really need us.” 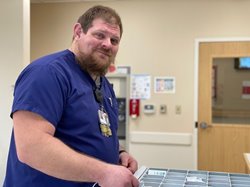 Nursing is a second career for Welsh. He was a first grade teacher for a couple of years and he worked at some odd jobs before he acted on a nursing suggestion from his wife, Elizabeth Rieke, a medical social worker at Carle Home Health. He returned to school, earned a degree as a certified nursing assistant and worked in nursing home healthcare before joining the residency program at Carle Foundation Hospital.

“We have good people who are smart and pay attention,” he said. “We work as a team from top to bottom and side to side.”

Carle is a large system with five hospitals and nurses have a voice. “I cannot count the number of ways I can get involved to help shape the organization,” Welsh said, adding he is currently on a council that contributes toward writing hospital policies.

Compassion and recognizing the needs of a patient are such a big part of the job and that often means going above and beyond to meet the patient where they are in the healing process. Welsh said he saw that demonstrated before the pandemic when a nurse arranged for a patient hospitalized longer than expected to overcome his sadness to spend some time outdoors with their family. “It made a huge difference for that patient.”

“Sometimes it is a matter of putting down the stethoscope and learning about the person who is the patient to help them heal faster,” Welsh said